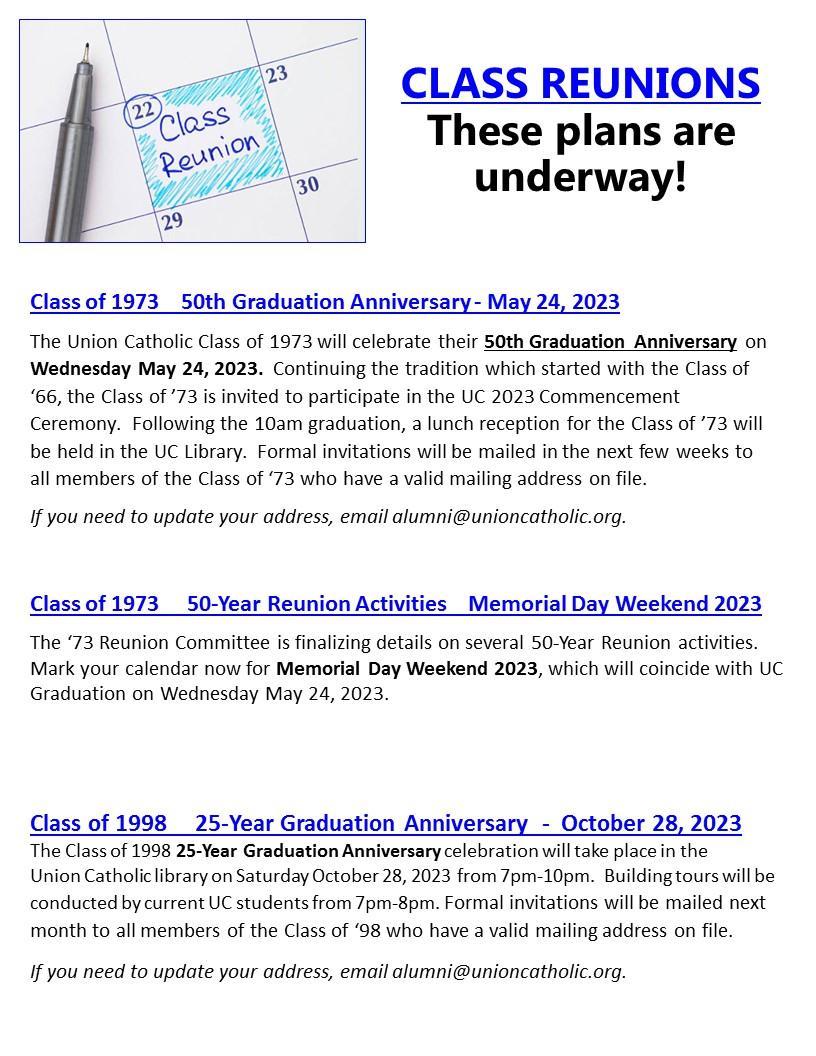 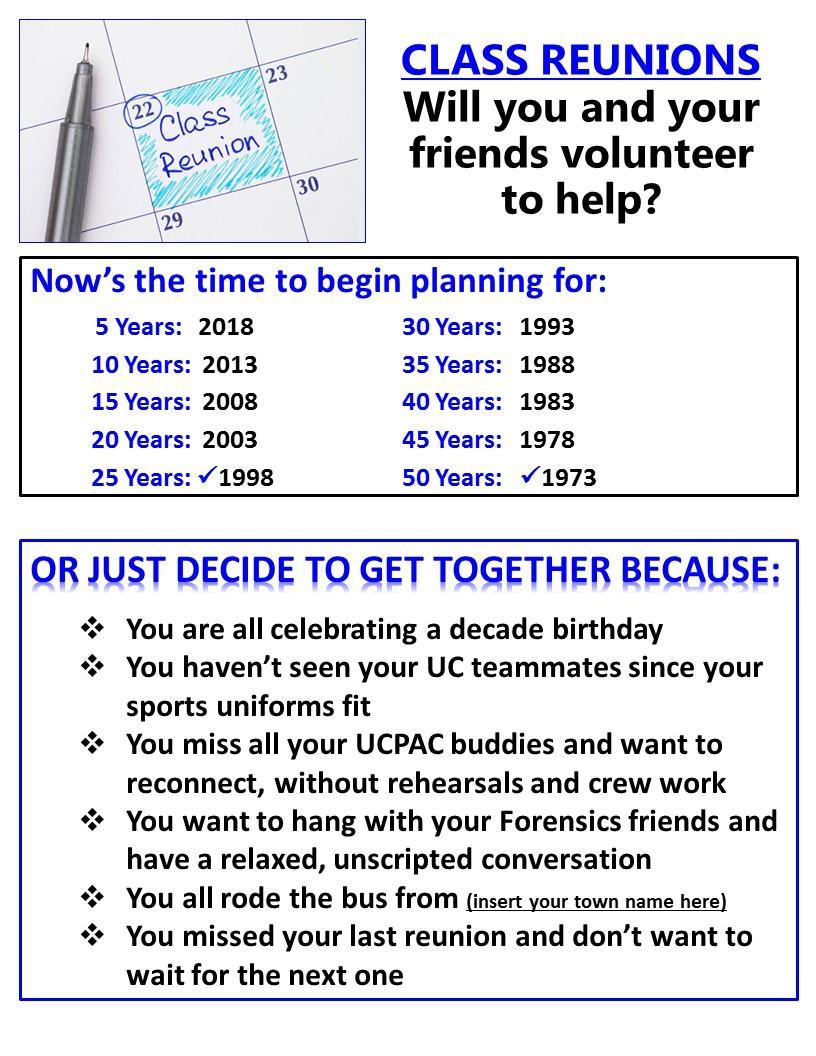 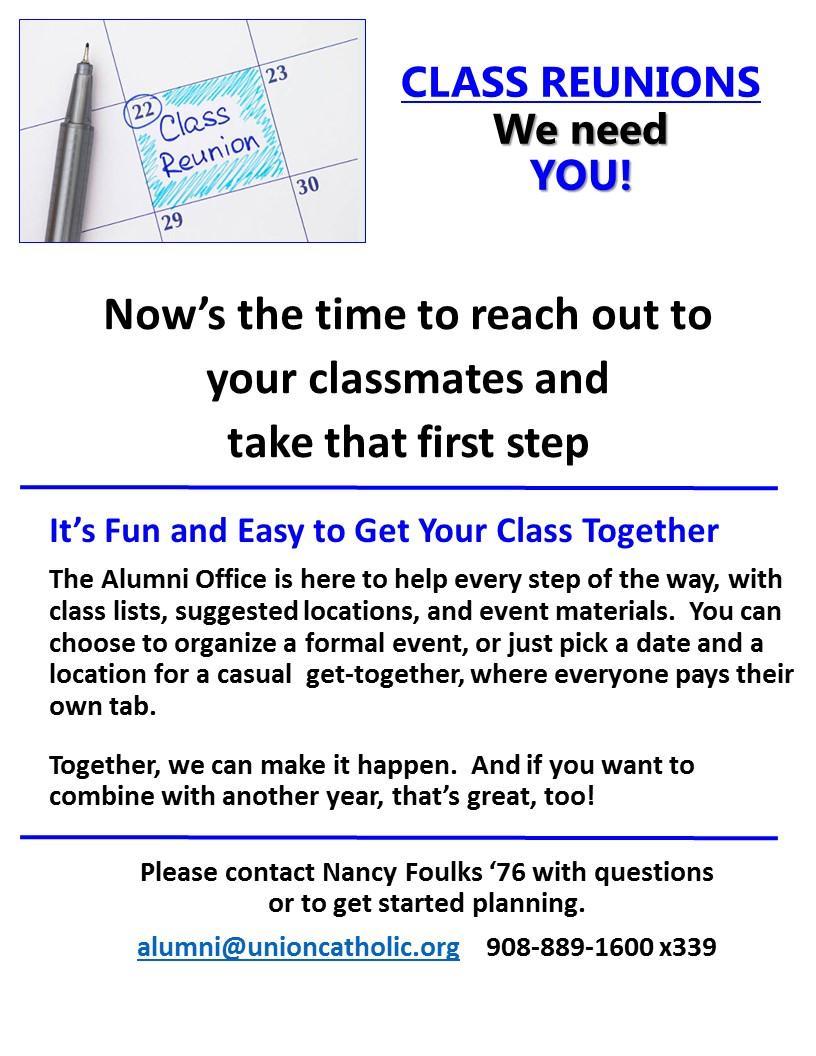 In May, many members of the Class of 1969 participated in the Union Catholic Class of 2019 Commencement Ceremony, followed by a luncheon at Shackamaxon Country Club. Some classmates missed the May event, so the Class of 1969 organized a 50-Year Reunion for November 2, also at Shackamaxon Country Club. The turnout was amazing, with more than 80 people in attendance.  Welcomes were provided by both the Girls School 1969 Student Council President Kathy Kinney Mariucci, and the Boys School 1969 Student Council President, Jack Tarantin.  There were silent auctions, raffles, and many, many photos - but mostly there was a wonderful sense of school spirit. Many attendees had participated in school tours of Union Catholic prior to the reunion, and were comforted to see things as they remembered it, and yet were enthused by all of the advancements and innovation.  Quite a few alumni flew in for the reunion, from as far away as Florida, Utah, and New Mexico.  They had a pre-reunion Pub Meet-Up on Friday night at Stage House in Scotch Plains, to kick off the festivities; what a fun group!

The Union Catholic High School classes of 1970 and 1971 participated in their 50th Graduation Anniversary celebrations on October 23 and October 24, 2021 respectively.  The weekend events began with a Saturday afternoon luncheon in the school library for the class of 1970. Attendees were invited to take personal tours of UC hosted by current Student Ambassadors. The festivities continued Saturday night with happy hour at Stage House in Mountainside for the classes of 1970 and 1971 combined.  Sunday morning mass at Immaculate Heart of Mary Church, across the street from UC, was celebrated by Father Mike Ward ’82, who bestowed a special blessing upon all UC alumni in attendance. Then, on Sunday afternoon, the class of 1971 had their building tours and celebratory luncheon. The weekend drew alumni from near and far, including Illinois, Florida, North Carolina, Pennsylvania, Maryland, California, Connecticut, and even an alumnus who drove out from Oregon!  One alumna shared this message that was echoed by several others, “It was such a lovely celebration for our 50th Anniversary, and a wonderful afternoon! I am so proud to be a UC alumni. Walking down the halls that echo our past and seeing some of my classmates reinforced that feeling of pride and comradery and family that UC was and still is all about. Feeling blessed!”  Here are several photos from the weekend.  To see additional photos of either the 1970 or 1971 celebrations, click on the links below to view many more pictures of happy UC alumni faces.
1970 Luncheon:     https://drive.google.com/drive/folders/1jlLo9gKFpGllFb6K6Eo1pj56JB57_Skg?usp=sharing
1971 Luncheon:     https://drive.google.com/drive/folders/1WopWu3FnGZCWdUNuq1ytZpgBuM7i2xEr?usp=sharing

Following on the heels of a very successful 45th reunion celebration,  Bill Courtney '74 generously hosted a holiday get together at his local winery, Winemakers of Somerset.  The event took place on Thursday December 12, 2019, from 6pm-10pm.  Bill provided the wine and classmates brought snacks and their holiday spirit.
Attendees included (l to r):
Bill invites all UC Alumni to stop in and say hello!
Winemakers of Somerset
9 John Street
Bound Brook, NJ 08805
https://www.winemakersofsomerset.com 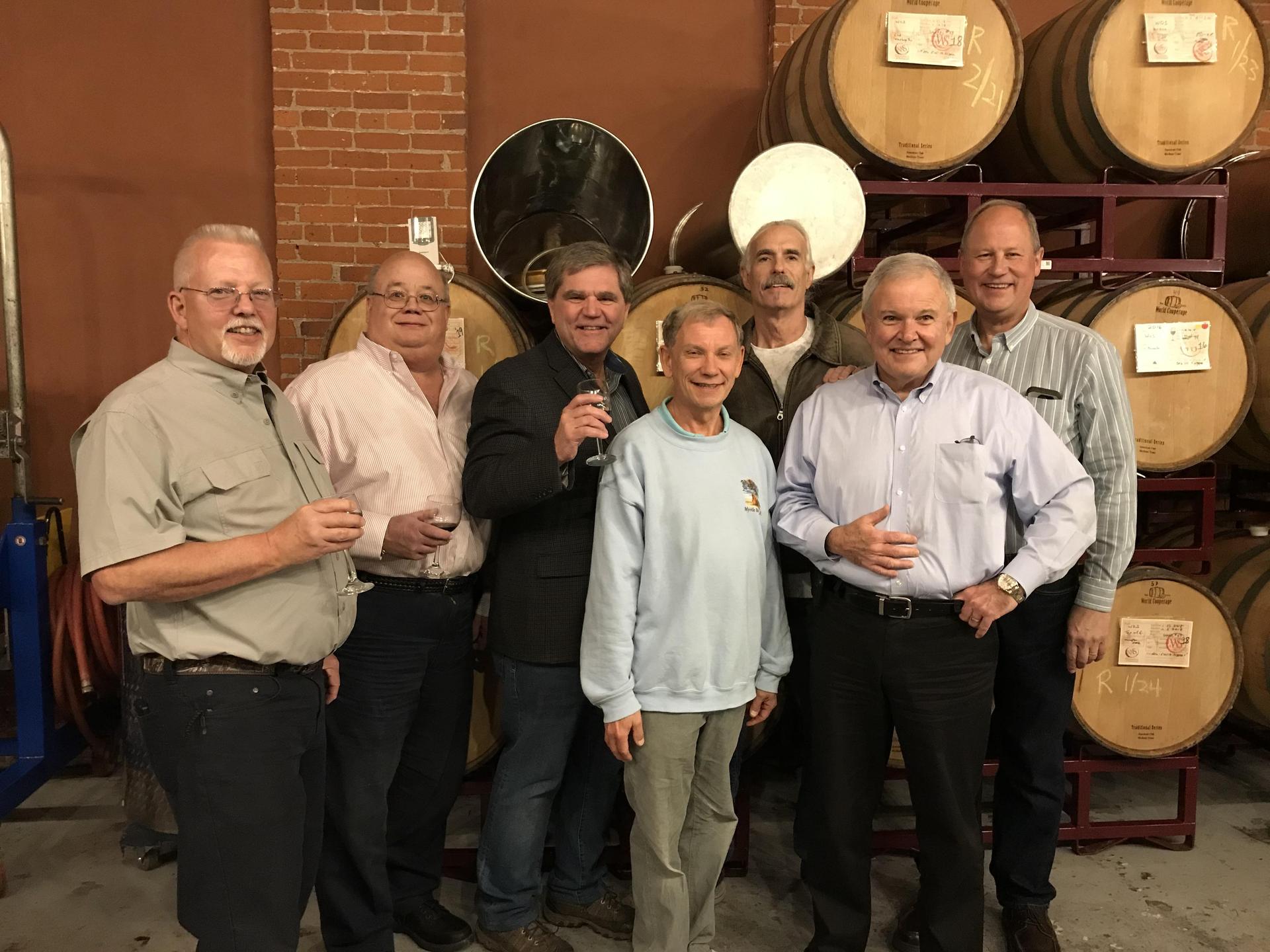 It was an amazing night when the Class of 1974 came together at the Best Western in Murray Hill for their 45-Year Reunion.  The lead committee members, Rich Fedison, Loretta Santacroce, and Michele Savage, worked non-stop to track down and personally invite their classmates, resulting in a fabulous turn out.  Other committee members added extra special touches, including illuminated centerpieces that featured yearbook pictures of every attendee.  The Class of ‘74 gifted Union Catholic with a generous donation, for which UC is incredibly grateful. It will be used to establish the Class of 1974 Endowed Scholarship, with the hopes that the scholarship will be fully funded by the time they celebrate their 50th Graduation Anniversary in 2024.  Perhaps the greatest tribute was this observation from a spouse who attended the reunion, “I am in awe of the phenomenal class spirit and loyalty that the alumni have for Union Catholic. God bless you all!”

According to the Class of 1975, they have held a reunion every five years except for one miss.  That may well be a UC record! So the pandemic wasn’t delaying them any longer.  They reserved two private rooms upstairs at Stage House in Scotch Plains and celebrated their postponed 45-year reunion. Dave Babbitt, Tom Boylan, Brian Gates and Sharon Schiller LaForge made sure the guests had a wonderful time.  They want to remind all their classmates that your milestone 50th Graduation Anniversary celebration is just 4 years away; mark your calendars. 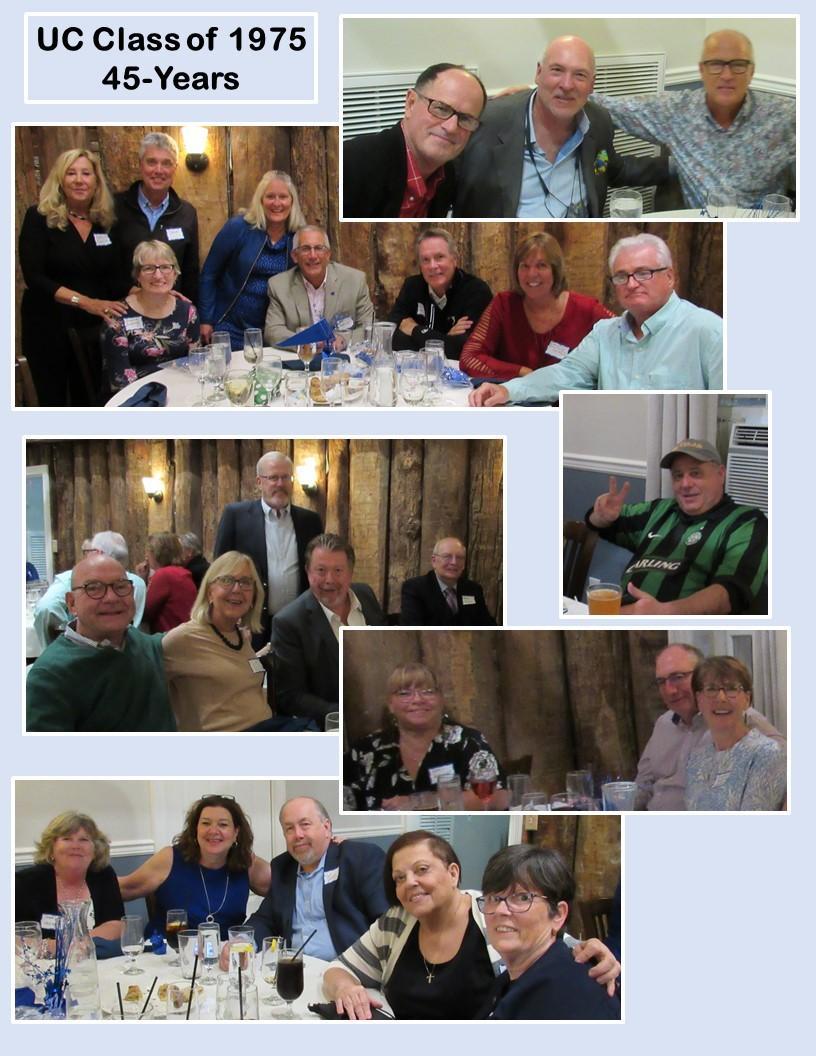 The Class of 1979 has always been an active participant in UC events, such as Pub Night and Tricky Tray. So, it was no surprise that more than 65 classmates attended their 40-year reunion at Darby Road on October 19.  The room was buzzing and the energy level was high with hugs all around, thanks to the efforts of Kathy Hamel, Barbara Chandler Coletti, Maureen Aracin Leitner and Pete Pepe.  There is no doubt that this group will be back together multiple times before their 45-year reunion rolls around in 2024. Check out the Class of 1979 Facebook page for additional photos.      https://www.facebook.com/groups/227400074740/

The Class of 1980 put out the word for classmates to join together at Stage House. Impromptu can be easy, fun, and relaxed! 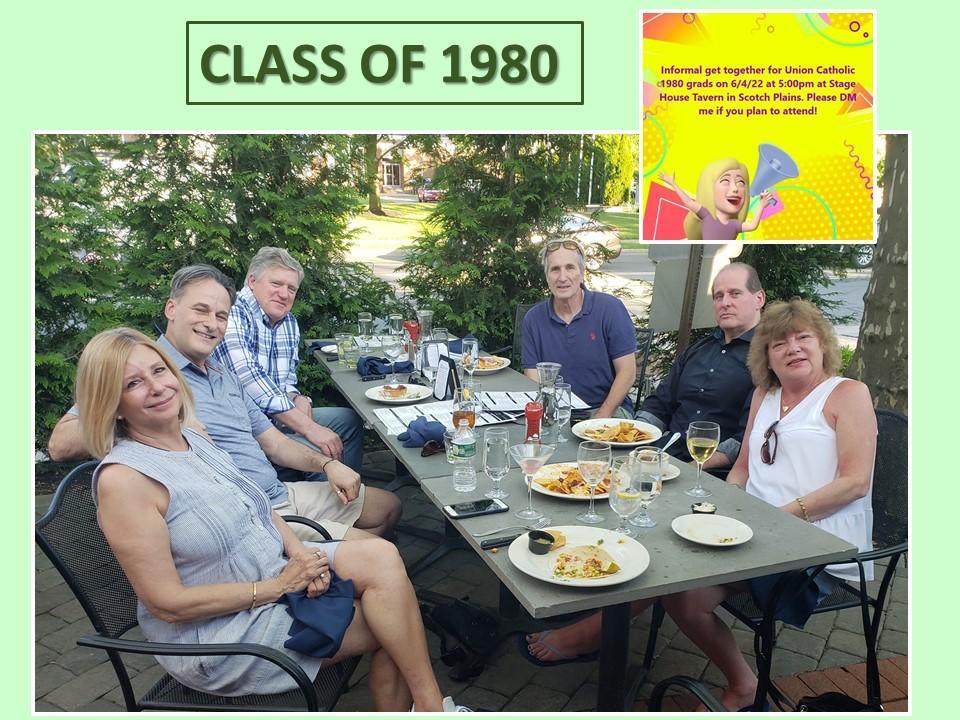 If the pandemic thought it could derail Maryann Schiller Degnan and her team of Amy Szot Torchia Bottega, Aimee Preston, Gerry Clyne, Brian Lane and Pat Howard, from celebrating their 40-year reunion, that was fool-hardy.  The reunion originally planned for October 8, 2020 eventually took place on October 9, 2021!  Thank goodness they reserved the entire space at the Tavern at Ashbrook, because the turnout was sensational.  Classmates brought and displayed old photos, varsity jackets, prom invitations and lots of other UC memorabilia which sparked many happy UC memories.  Check out their FB page for many more photos:
https://www.facebook.com/groups/463875767732771 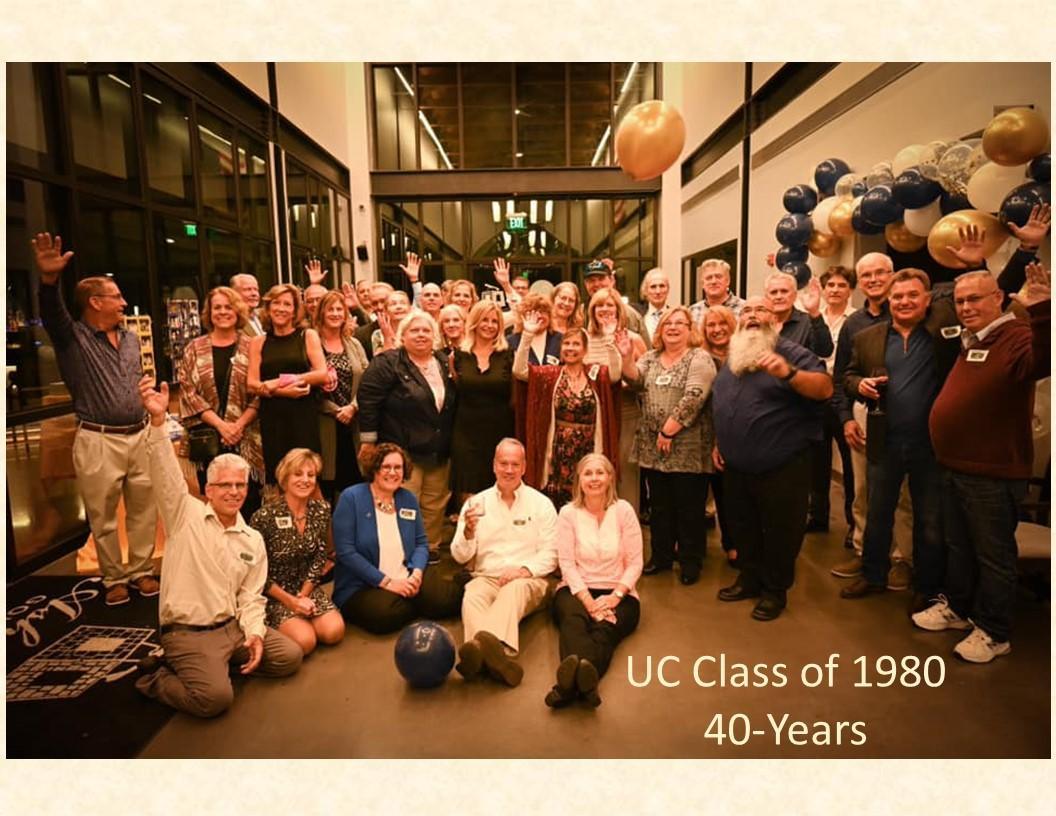 For their “40-ish” reunion, the Class of 1981 brought together more than 40 classmates at Ellery’s Grill & Pub in Middlesex, NJ.  This class gets together every five years and was happy to continue the trend – even if slightly delayed by the pandemic. 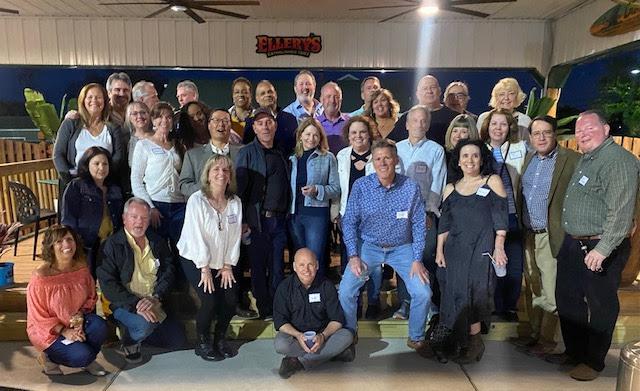 The Class of 1989 spent many high school summer days enjoying the Jersey Shore. So, when it came time to plan their 30-year reunion, Long Beach Island was the obvious choice.  Classmates were given the date more than one year in advance, so many scheduled their family vacations in conjunction with the reunion.  Whether they stayed for the weekend, a week, or even a month, they were happy to be “down the shore” together again. The formal reunion was held on Friday night, but extended well into Saturday afternoon for many!  Their class Facebook page is filled with photos and videos, including these THEN/NOW versions. Not only did the Class of 1999 make a generous donation to UC, they also raised funds in memory of their recently deceased classmate and donated to her parish as well.  Kudos to Paul Martinho, Kristin Horan Laffey, Anne Ventola, Kathleen Karl Morgante, Trisha Murray Dulinski, Michelle Rundzieher Antonelli, and Michele Calogero-Duca for a super event. 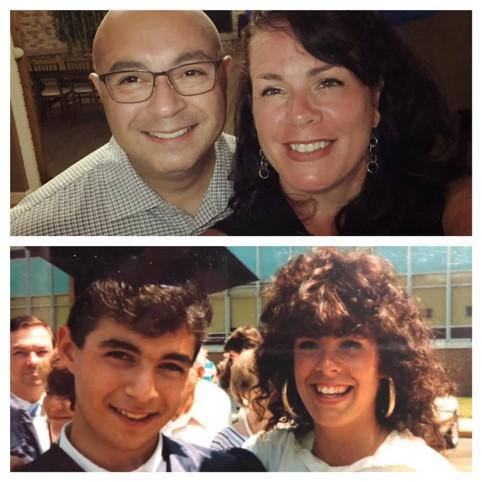 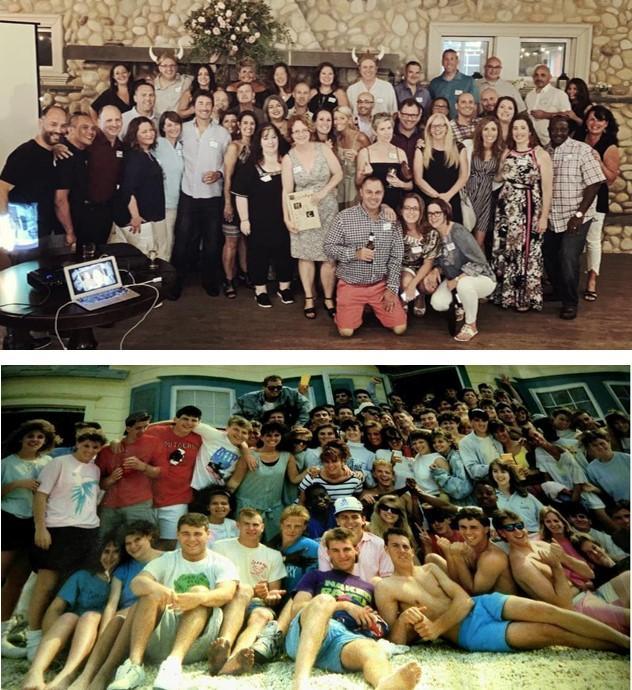 To be able to celebrate your 25th Graduation Anniversary is a special occasion, and the members of the Class of 1994 who came back to their alma mater to mark 25 years truly had a special time.  As soon as they entered the front door at UC, they were hugging each other as if they had not been together since 1994 - and in many cases that was accurate!  No worries, they were instantly reunited and sharing life stories.  The current UC Student Ambassadors who were on hand to conduct building tours were touched by the camaraderie, and vowed NOT to lose touch once they graduate. The 1994 alumni visited science classrooms, lounged in the cafeteria, and posed for photos on the stage in the auditorium.  The party continued with food and drink in the library. Some members of the Class of 1994 had been together through elementary school and high school; such a strong bond. The class was happy to see a  "surprise" guest at the reunion, Mr Bruce Zehnle. A special thanks to Lauren Casa who helped coordinate this milestone event and to track down “missing” classmates.

A fun time was had by all, as the Class of 1999 gathered together at Stage House Tavern in Somerset on September 14, to celebrate their 20-Year Reunion.  Of course there was food and drink, accompanied by plenty of laughs while looking through old yearbooks, and stories that began with “Remember when…”  The classmates ended the evening asking the reunion committee when they would begin planning for their milestone reunion of 25 years! Thank you to Andrea daFonseca Housel, Derrick Levine, Kathy Karasiewicz-Mendez and especially Tiana Mayes for all of their hard work.  Union Catholic gratefully thanks the "99ers" for their very generous gift back to their alma mater; may you all be blessed! 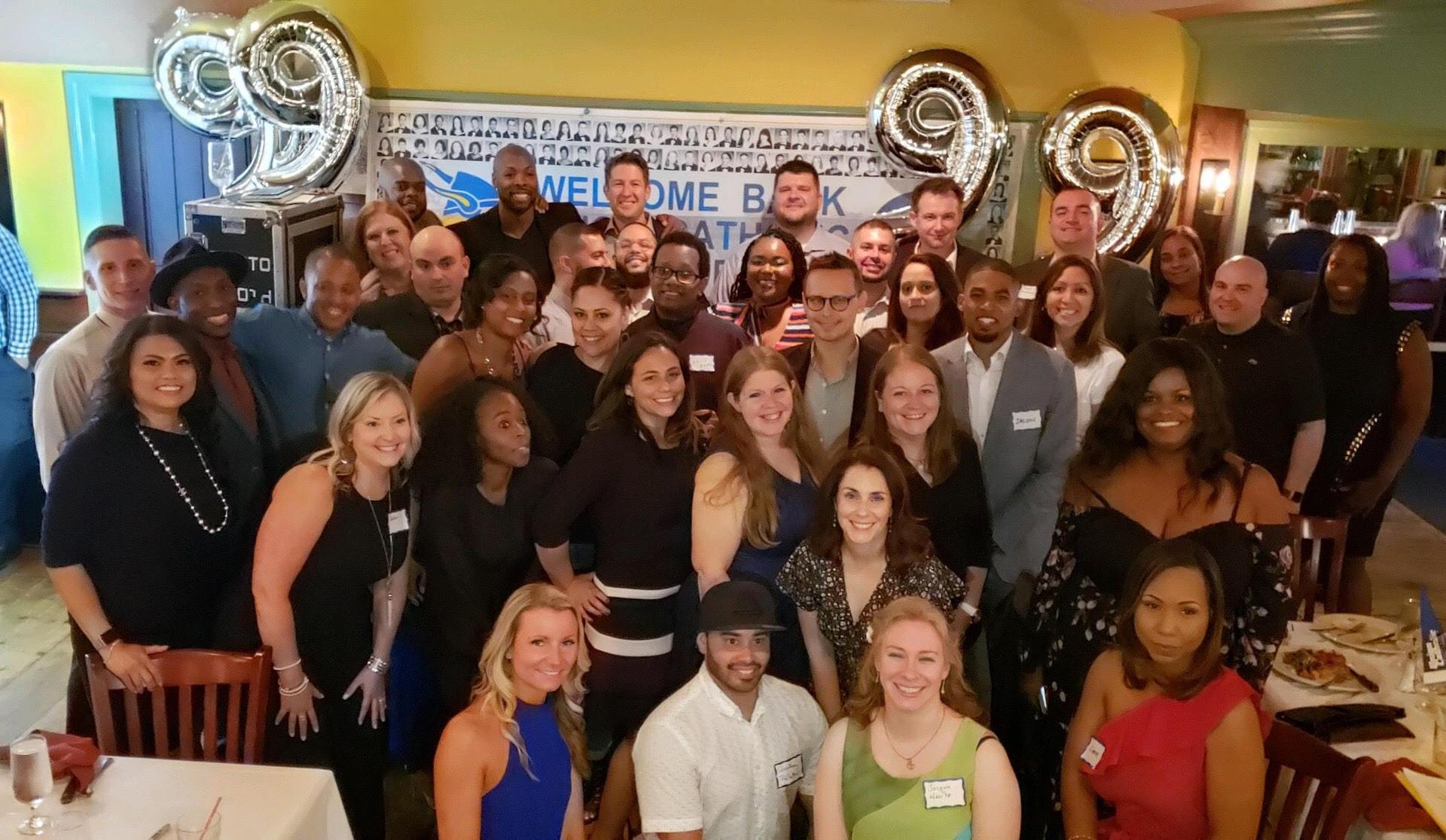 This class had originally planned to host their reunion at Van Gogh’s Ear Café in Union, which is owned by one of their classmates.  But, as Covid concerns escalated, the committee of Zeena Koda, Jennifer Yelverton, Andria Lopez, Melanie Mitchell and Michael Coleman quickly adjusted.  With just 2 weeks to go until their reunion, they were able to move the event to a tent at River & Rail Cantina in Cranford.  Attendees loved paging through old yearbooks while enjoying yummy Mexican food and drinks – and each other, of course! 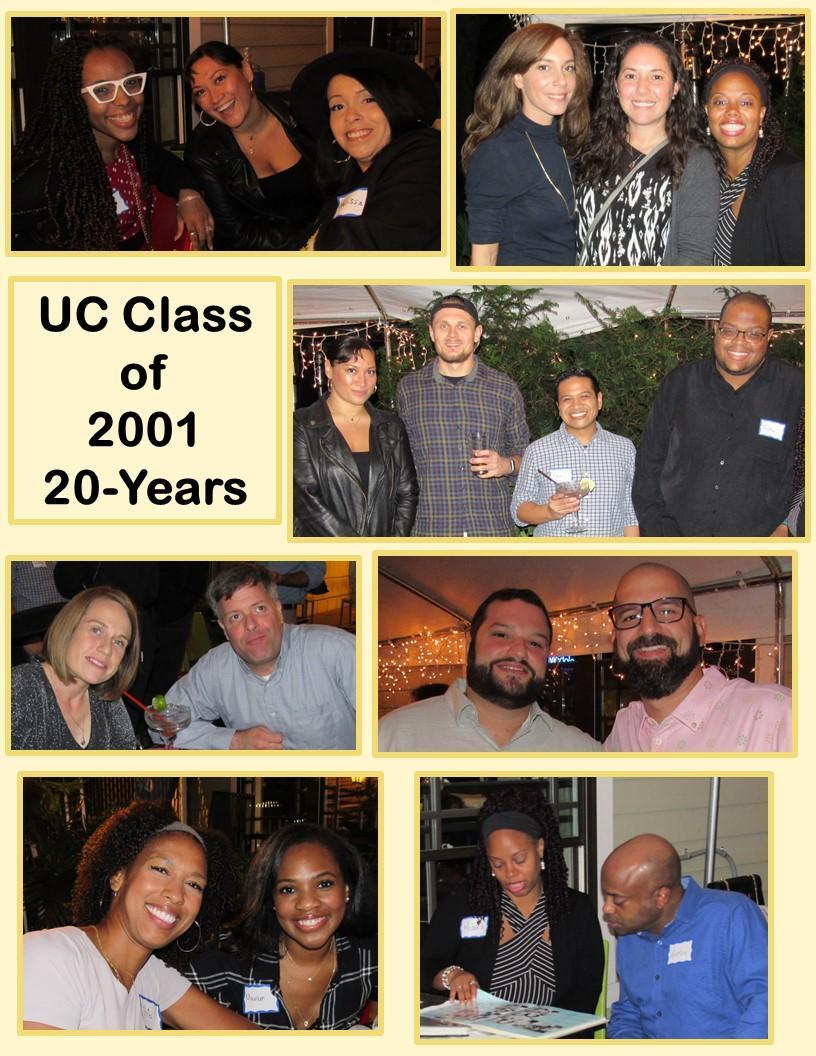 The Class of 2004 celebrated together on Saturday October 12, 2019 at 80 River Bar & Kitchen in Hoboken.  All attendees agreed that much has changed in their lives in the 15 years since they graduated from UC, such as college, jobs, marriage and children! Thank you to Bryan Smith and Kimberly Schurtz for organizing this reunion. For additional photos, check out the Class of 2004 FB page.  https://www.facebook.com/groups/424396017596236/

The words of one member of the Class of 2009 best sum up the sentiments of the more than 60 classmates who celebrated their 10-year reunion on November 30, 2019 at Cranford Social; “Had an amazing time with you all tonight! After ten years the Class of 2009 still looks amazing. Thank you Ellen, Stephanie, Sara, and Meggie for putting this amazing night together. Let's not make it another ten years before we see each other again! I love you all! 09 still fly!!!”        Check out the Class of 2009 FB page https://www.facebook.com/groups/1451786995067318/

This super-engaged class kept their reunion streak going, as they have held both 5-year and 10-year reunions.  They celebrated this time in the warmth of summer under an oversized tent at Stage House in Mountainside.  They had a great turnout as the classmates reminisced and shared life updates.  No doubt the committee of Joe Seebode, Alyssa Villa, Samantha Niziolek, Jesse Domanski and Jenna Socci are already thinking ahead to their 15-year reunion! 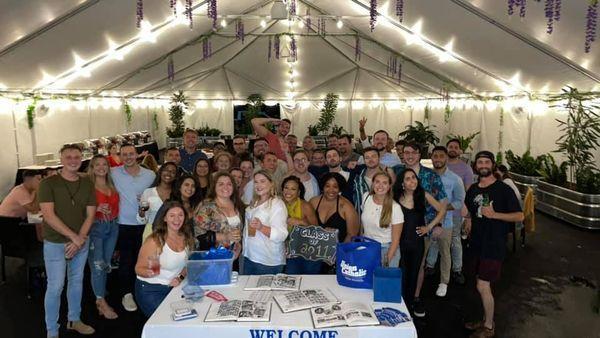 How could ten years fly by so fast?  That’s what members of the Class of 2012 were saying on Saturday November 26, 2022, when they came together to celebrate their 10-Year Reunion at Stage House in Scotch Plains. The happy smiles in these photos say it all.  Shout out to Caroline Valenzano, Shanice London and Dave Schanz for organizing the reunion.

Being home for Thanksgiving meant that members of the Class of 2014 could get together and give thanks for their UC friendships.  Classmates gathered at the Stagehouse Tavern in Mountainside on November 29, 2019 for a fun “pub meet-up.” 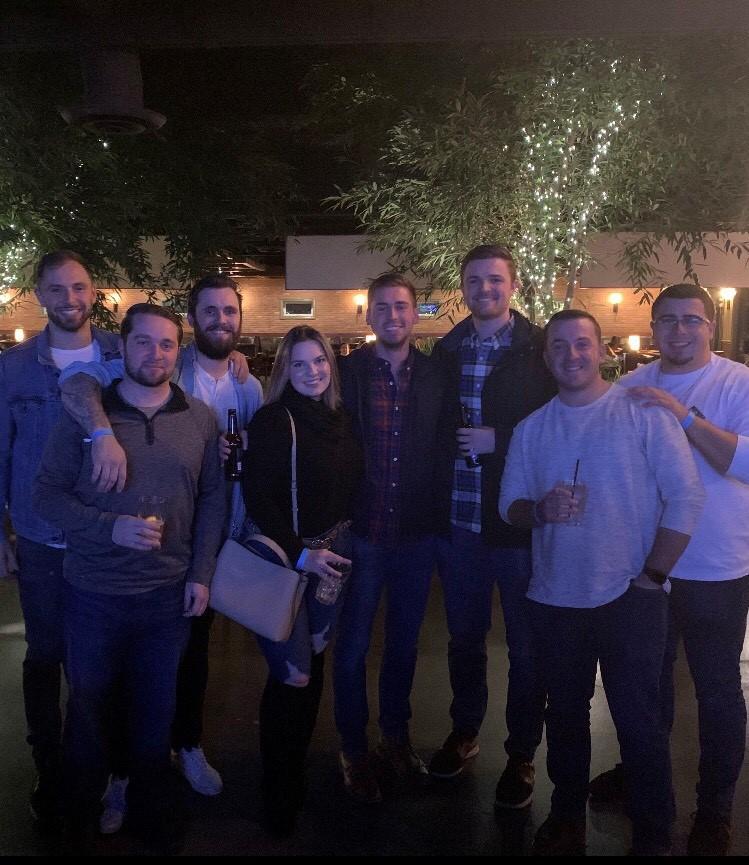 This section "under construction"

REACH OUT TO YOUR CLASSMATES AND GET YOUR COMMITTEE GOING; IT WILL BE A GREAT EXPERIENCE!

IT IS FUN AND EASY.