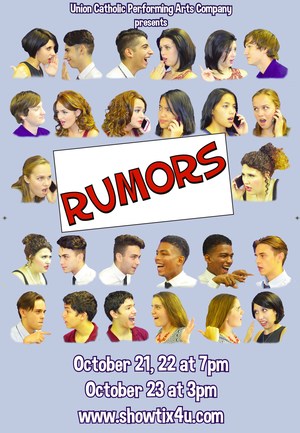 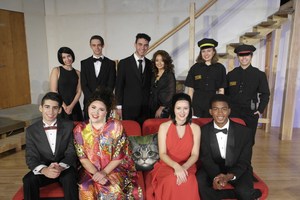 Scotch Plains, NJ— Union Catholic Performing Arts Company presents its fall show “Rumors” by prolific  playwright Neil Simon, directed by John Rotondo ’07 and produced by Maryann Carolan ’86. At a large, tastefully appointed Sneden's Landing townhouse, the Deputy Mayor of New York has just shot himself. Though only a flesh wound, four couples are about to experience a night full of unexpected surprises. Gathering for their tenth wedding anniversary, the host lies bleeding in the other room and his wife is nowhere in sight. His lawyer, Ken and wife Chris must get "the story" straight before the other guests arrive. As the confusions and miscommunications mount, the evening spins off into classic farcical hilarity.

Student performers include Lexi Marta ’17 of Scotch Plains as Chris, Makay Johnson ’18 of Roselle as Ken, Kimmy Paltz ’17 of Edison as Claire, Nick Mehno ’20 of Union as Lenny,  Deirdre Pepe ’17 of  Scotch Plains as Cookie, Matthew Gomez ’19 of Rahway as Ernie, Lauren Guerra ’17 of Warren as Cassie, Steven Pego ’17 of Newark as Glenn, Edwin Rivera ’19 of Plainfield as Office Welch, Colleen Falconer ’18 of Maplewood as Officer Pudney, and Audrey Davis ’19 of Fanwood, Rebecca Penevolpe ’20 of Colonia, and Ben Weaver ’17 of Carteret as the understudies.

Union Catholic is proud to present the 10th Anniversary production of this audience favorite comedy, having produced is once before in 2006.

For over 50 years, Union Catholic High School has earned its reputation as one of New Jersey's foremost Catholic secondary schools. For information, visit unioncatholic.org.