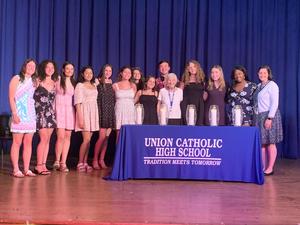 Scotch Plains, N.J. - The ceremony was held on Tuesday at Union Catholic
Union Catholic continued a long-standing tradition on Tuesday when the Junior Rite of Passage ceremony was held in the auditorium at the school.
The Junior Rite of Passage is a prayer ceremony for rising seniors. During the ceremony five candles were lit by the new Student Council Executive Board members, President Olivia Cassidy, Vice President Beatrice Montero, Secretary Bridget Davis, Media Coordinator Jackie Carey, and UC Principal Sister Percylee Hart, RSM.
Each candle represents the five core values of Union Catholic: Respect, Responsibility, Honesty, Compassion and Community. The candles symbolize the commitment to being living examples of each core value and a light of God's love to the world.
Also on hand were the members of the 2021-22 Executive Board, President Ave Perona, Vice President Emme Haddad, and Media Coordinator Taylor Benjamin, who delivered readings.
Senior Ambassadors Kevin Caffrey, Grace Donnelly, and Meghan Sherer, and Senior Peer Ministers Mackenzie Flood and Adela Rakoski also delivered readings.
As a gift to Union Catholic, the Class of 2022 is presenting a statue of Mary to be placed in the Senior Courtyard. The Class of 2022 dedicates the powerful presence of Mary to serve as a source of hope and inspiration for the student body and the Union Catholic Community.
Following the ceremony, the Class of 2022 headed into the Senior Courtyard for the first time. The Courtyard is a place that only the Senior Class at UC is permitted to use.
Published May 31, 2022 Print