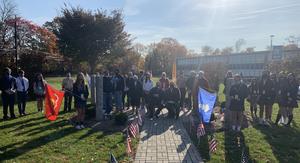 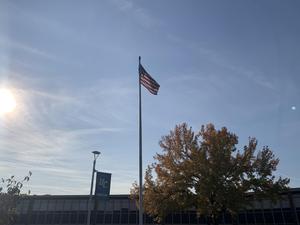 Scotch Plains, N.J. - The annual ceremony was held on Thursday morning in front of the school.
Union Catholic’s annual Veterans Day Ceremony on Thursday was a heartfelt tribute to those who served as the UC Community came together to honor the sacrifices that veterans have made for their country.
With U.S. flags displayed around the Veterans Memorial Pathway in front of the school and a strong feeling of pride and patriotism in the air, the ceremony, hosted by the UC Hearts For Heroes Club, saluted members of the UC Community who served in the U.S. Armed Forces, as well as alumni, relatives, parents, friends of UC, and all veterans.
The ceremony began when Dr. Karen Piasecki, UC’s Associate Principal ad a member of UC's Class of 1988 , welcomed everyone to the ceremony. Senior Michael Palacio, a Hearts for Heroes member, led the Pledge of Allegiance, and senior Addy Chelak, a peer minister, delivered the opening prayer.
Principal Sister Percylee Hart, RSM, delivered opening remarks and addressed the veterans by thanking them for their patriotism and service. Veterans then walked the Veterans Memorial Pathway to place flowers at the foot of the memorial, which was dedicated in 2012 after being built by 2013 UC graduate Michael Eastman, who did it for his Eagle Scout project.
A medley of military anthems that represent each branch of military service was then played as veterans stood during their respective anthems. The anthems included “The Caissons Go Rolling Along” (Army), “Anchors Away” (Navy), “Semper Paratus” (Coast Guard), “The Wild Blue Yonder” (Air Force), and “The Marines Hymn” (Marine Corps). These official songs are part of the heritage of each branch of military service and serve as an anthem to rally behind.
The Prayer of the Faithful was led by Ms. Nancy Foulks, UC Class of ‘76 and Director of Alumni Relations, along with seniors Joylynn Awurama Biney and Julianna Rama, both peer ministers at UC.
Abby Granrath, the President for the Hearts for Heroes Club, gave closing remarks and the entire audience recited the “Veterans Memorial Blessing” which served as a closing prayer.
The ceremony concluded with junior Amaia Onque-Shabazz singing God Bless of America, accompanied by senior Nicholas Marelli.

Granrath, whose grandfather, Michael Pechillo, is an Army veteran, was thankful to have participated in the ceremony.
“I am beyond grateful for the dedication and sacrifices our veterans have made,’’ said Granrath, “Our veterans deserve our gratitude for their willingness to serve our country and help protect our rights and freedom. They demonstrate a love for our country in which they were willing to lay their life down in order to ensure that everyone continues to comfortably live the lives we do. Our veterans make the absolute greatest sacrifice as  Americans, and they deserve our utmost respect for doing so. It is an honor to have my grandfather, who willingly served our country, continues to leave such an impact on my life part of my life, be part of my life and leave such an impact on my life.’’
Published November 11, 2021