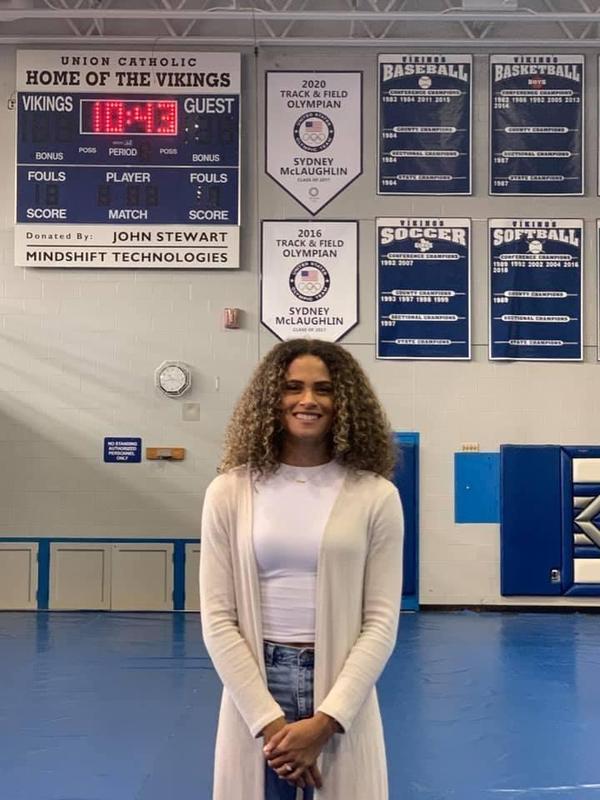 Scotch Plains, N.J. - McLaughlin, a 2017 graduate of Union Catholic, won the 400-meter hurdles with a world record time and ran on the gold medal winning 4x400 relay at the Olympics in Tokyo this past summer.

McLaughlin, who won two gold medals and smashed her own world record in the 400-meter hurdles at the Olympic Games this past summer in Tokyo, was simply overcome with joy to be back at her high school alma mater on Monday as Union Catholic held a celebration event to honor her remarkable accomplishments.

“Union Catholic will always be a special place for me,’’ said McLaughlin, who graduated from Union Catholic in 2017. “I have so many great memories with my track team, the faculty, friends, and coaches. I am just so excited to be back here around so many people that I care about, and who care about me. I think that being here at Union Catholic, and hearing some of the things that your teachers have said, and that Principal Sister Percylee Hart personally has said, really resonated with me and helped me along my journey. I am so grateful for the support everyone in the Union Catholic community has given me to help me get where I am today.’’

Five years ago, McLaughlin advanced to the semifinals of the 400 hurdles as a 17-year-old at the 2016 Olympic Games in Rio. This past August she returned to the Olympics and captured the gold in the 400 hurdles with a world record time of 51.46, and ran on the gold-medal winning 4x400 relay.

McLaughlin has been on a victory tour ever since the Olympics.

She was honored over the summer by her hometown of Dunellen when the track at Columbia Park in Dunellen was named after her, and now it was Union Catholic's turn to recognize McLaughlin's Olympic heroics.

Monday’s event began with an outdoor ceremony that was attended by the entire UC student body, local dignitaries, and some special guests, and concluded with the unveiling of a new banner in the gym to commemorate McLaughlin’s second Olympic appearance.

“It fills me with joy to welcome all of you here this morning and most importantly to welcome home, two-time Olympic Gold Medalist, Sydney McLaughlin as we gather together with Sydney in celebration of her highest gold medalist achievement as an Olympian.,’’ said UC Principal Sister Percylee Hart, RSM. As Sydney can attest, one of my two mantras for our students at Union Catholic has always been “to grow your gifts and talents and become all that God calls you to be.”

“Sydney’s achievement of breaking world records and winning two gold medals gives testimony to her response to this call,’’ said Sister Percylee. Thank you, Sydney, for serving as such a wonderful role model for our students to emulate and for being all that God calls you to be. My other mantra for the students is:   “Be Good, Do Good, Be a Power for Good.” Sydney is good. She is humble. She chooses good over evil and chooses kind every time. When you are a good person it will manifest itself in doing good.’’

“As a UC student, Sydney did good by engaging in charitable school projects and by reaching out to those in need,’’ said Sister Percylee.  “Her kindness to others were hallmarks of her interactions. And now, Sydney, what an awesome position you are in to be a “power for good.” Your worldwide recognition as an athlete provides you with a platform on a global level. It doesn’t get better than that!  I cannot wait to see the impact you will have at the global level with Jesus’ message of love. Sydney, what a blessing you are to our UC Community.  You are the shining example of what a role model should be.  We have great faith in you, Sydney, and we are so very proud of you. May God continue to bless you!’’

"Sydney is good, she is humble, she chooses good over evil. She chooses 'kind' every time," said Bishop Elias R. Lorenzo of the Archdiocese of Newark, who praised McLaughlin as a role model for all Union Catholic students.

"I bet you didn't know that I am the first mayor in all the history of Scotch Plains, to welcome a two time Olympic gold medalist, who just happens to have spent her high school years right here," said Mayor Josh Losardo. "Not only do you persevere and achieve, but you did it with class. I remember the moments your races were broadcast in August, and we all rooted hard for you. In our minds, we knew from the starting line that you would be the champion. It was a big celebration for all the other kids out there with big dreams of becoming the next Sydney. You have taught us that with hard work and dedication, any one of us can be the very greatest at what we do. You have that special gift, and it is contagious around here today.’’

Fanwood Mayor Colleen Mahr, a 1984 graduate of Union Catholic, was also very excited to be back at her alma mater.

“Good morning all you Vikings,’’ Mahr said to the crowd. “We are outside in this parking lot where I actually stood and hung out, many years ago, and I can't tell you how thrilled I am to be standing up here to say even hello to Sydney McLaughlin, a proud alumna herself from Union Catholic Regional High School."

"I come back to this school every once in a while, and I see the banner that says 'Where Tradition Meets Tomorrow, and the traditions that lay in this school will build the foundation for each of your tomorrows,’’ said Mahr. “It built my tomorrow, and it built Sydney's. So for all the young students out there, we look at Sydney as a role model. We know that we can reach as high as we can. We can embrace our faith. We can be true to ourselves, and we can always remember that we can always come home."

Al Mirabella, the Union County Commissioner Chair, presented McLaughlin with a proclamation from the County and commented that Union Catholic is the only high school where the principal (Sister Percylee Hart) is always cheered.

State Senator Joseph Cryan, who has sent one child and a nephew to Union Catholic, presented a proclamation from the New Jersey State Assembly. He commended McLaughlin for her track and field accomplishments, but also for her volunteerism, including helping the homeless of Central New Jersey and assisting with recovery efforts following Super Storm Sandy.

McLaughlin imparted some great words of wisdom to the crowd.

"Over the past year of my life, I realized that success is not measured by the amount of money, medals or followers that you may have, true fulfillment comes from obedience to God," McLaughlin said to the crowd. "People constantly scramble for authenticity. But my question to you is, Where are you looking for those things? Things such as money, notoriety and materials are not bad things, but they will never fulfill you. True happiness and purpose come from God."

McLaughlin told Ryan Patti from NJ.com that being able to share her success is the best part of her fame.

“It’s so much more exciting for those around me than it is for me,” McLaughlin told Patti. “Being able to win a gold medal has been a childhood dream of mine, but for those around me to be able to be a part of something I worked for, it means so much. I’m grateful that I can bring that opportunity to them.”

After McLaughlin pulled on the rope to take the tarp off her new banner, which now gives her a total of nine  hanging in the gym, she fielded questions from the current track and field team members and offered them some great advice.

McLaughlin enjoyed being back at her alma mater so much that she stayed around long after the ceremony ended to take photos with every student during the lunch periods, and she signed autographs for anyone who wanted one.

When it was finally time to leave after an unforgettable day, McLaughlin was still wearing that big smile across her face.