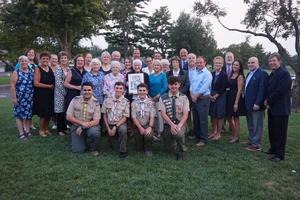 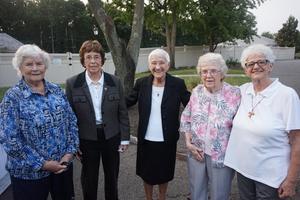 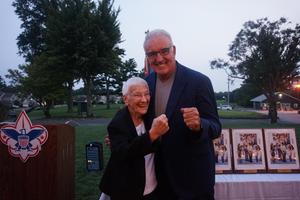 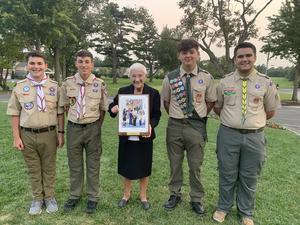 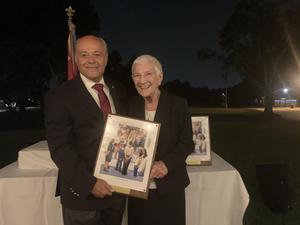 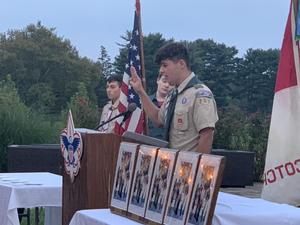 Scotch Plains, N.J. - The ceremony took place at the Shackamaxon Country Club
Union Catholic Principal Sister Percylee Hart, RSM, received another very prestigious award when she was honored as a recipient of a Union County Lifetime Achievement Award by the Boys Scouts of America during an awards dinner on Tuesday  at the Shackamaxon Country Club in Scotch Plains.
The Lifetime Achievement Award is presented to those who exemplify in their daily life the ideals that the Boy Scouts of America have expressed in the Scout Oath and Law for more than 100 years. The recipients were chosen for their outstanding community service as evidenced by the interest and leadership they have given to many worthwhile organizations as well as the respect and esteem in which they are held by their colleagues.
A large contingent of members of the Union Catholic community were on hand to celebrate with Sister Percylee.
The ceremony included Union Catholic students and boys scouts Nathan Korner, Michael Mahaffey, and Andrew Abrantes, and Nathan’s brother, Patrick, and it featured a blessing from Union Catholic Athletic Director Dave Luciano, and a speech by Union Catholic Assistant Principal Dr. Jim Reagan Jr., who introduced Sister Percylee.

Sister Percylee was humbled and honored to be selected for such a distinguished award.
“I am very thankful and humbled to be selected as the recipient of the Boy Scouts Lifetime Achievement Award,’’ said Percylee told the crowd. “I congratulate and commend all the honorees who are being recognized. It is a privilege to be numbered among you. I am honored to accept this award on behalf of the entire UC Community who support me day in and day out in my leadership role of serving as Principal of Union Catholic. My achievements are the result of the commitment, collaboration and excellence demonstrated every day by the Union Catholic faculty and staff. Our goal is to graduate academically successful young men and women who demonstrate our core values of responsibility, respect, honesty, community and compassion. This fusion of education and moral foundation allows our students to take their place as good citizens and leaders throughout Union County and beyond.’’
Sister Percylee also spoke about Union Catholic’s strong commitment to the boy scouts.
“UC is especially proud of its lineage of Eagle Scouts,’’ said Sister Percylee. “Our commitment to scouting is evident in the three Eagle Scout Service Projects: The Veterans Memorial, the 9/11 Memorial, and the Peace Pole, prominently displayed on our front lawn. Just as the Boy Scouts have existed for 100 plus years in accordance with their Oath and Law, duty to God, self and others,” I thank God for blessing me with the opportunity of more than 40 years to serve in a way that likewise has inspired students to pursue opportunities that not only help them to grow but also help others to grow.’’
Published September 15, 2021