An inside look at Jim and Jennifer Siburn, who will be inducted into the Union Catholic Hall of Fame 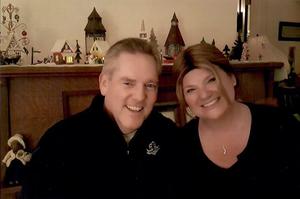 Scotch Plains, N.J. - Jim and Jennifer Siburn are two of the most avid supporters to the mission of Union Catholic.
As part of Union Catholic's preparation for its Class of 2021 Hall of Fame Induction Ceremony, we are rolling out profiles on each of the members who will be enshrined on Sept. 17 at the Shackamaxon Country Club in Scotch Plains.
In the spotlight today are Jim and Jennifer Siburn.
Jim Siburn became part of the Union Catholic community as a freshman in 1977, which was the opening chapter of the Siburn family story and their dedicated commitment to this school community.
Jim and Jennifer Siburn, who are two of the most avid supporters to the mission of this school and whose actions and continued involvement help chart the course for Union Catholic of the future. Their involvement and commitment to Union Catholic has been extensive and unwavering for decades.
After graduating from Union Catholic in 1981, Jim attended Farleigh Dickenson University where he met Jennifer. Jim graduated in 1985 with a degree in Business Management and Jennifer in 1986 with degrees in Economics and Finance.
They both started their careers in the banking industry before Jim moved into Medical sales.  In 1998, Jim formed OrthoMedix, LLC and became the Smith + Nephew Distributor for the North East area.  In addition to his work with Smith + Nephew, Jim co-founded Tissue Tech, LLC, an orthopedic biologic products company, in 2003, where he resides as the company’s CFO.
Jennifer worked in the traditional large for-profit banks, but she is most proud of her work with the Elizabeth Development Company, a small private, not-for-profit economic development company located in the City of Elizabeth.
Despite their successful careers, it is their passion for volunteering that sets them apart.  Jim is an avid golfer and is actively involved on several committees at Suburban Golf club, while Jennifer has donated her time to Robert Wood Johnson Medical School, Association of Families and Friends, The Susan G Komen’s North Jersey Chapter for Breast Cancer Research, and the AIDS Resource Foundation for Children.
When Jim and Jennifer’s children came to Union Catholic, Sean a graduate from the class of 2011 and Jamie from the class of 2014, it gave the Siburns another cause to devote their time, passion, energy, and resources to
Union Catholic which has been the beneficiary of their commitment to the UC mission ever since.
Jim has been a member of the Union Catholic School Consultative board since 2011 serving on numerous institutional advancement and development sub committees.
The Siburns have been instrumental in the school’s relationship with Shackamaxon Country Club and have been major supporters of the Union Catholic Golf outing.  They have also assisted with the technology and infrastructure of our school along with the multiple Rio and Tokyo US Olympic events our school community was able to celebrate.
Even though Jim and Jennifer’s children have graduated from Union Catholic, their dedication and commitment in serving the school community remains as steadfast as ever and has had an impact in making a difference to this school community.
Published September 11, 2021 Print