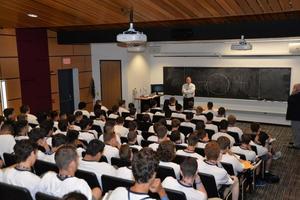 Scotch Plains, N.J. - The program was held at Rider University
Union Catholic’s Michael Palacio, Joseph Sebastian, Abhijay Upadhyay, Colin Whiteside, Joseph Paglia, Brian Touma, and Jonathan Colamedici were among the students from New Jersey who attended the 75th session of the American Legion Jersey Boys State (ALJBS), which was recently held at Rider University in Lawrenceville.
The students were chosen to attend the college credit-qualified and preeminent learn-by-doing leadership program, sponsored by the American Legion Department of New Jersey, based on their school involvement, academic excellence, leadership qualities, and character.

The goal of ALJBS is to develop good citizens by inspiring the youth of New Jersey to take a more active and intelligent interest in the operation of our state and nation and in the privileges and responsibilities of citizenship. The program also helps young people understand the sacrifices made by our veterans to preserve our nation and way of life.
Every student at the event had the opportunity to participate in the political party process by running for office, participating in friendly debate and voting in elections, among many other events. By the end of the week, the delegation elected a new ALJBS Governor, Lieutenant Governor and two Boys Nation Senators, who will attend a national program in Washington, D.C. this summer.

There were also leadership and career seminars taught by business executives, military representatives, political consultants, law experts, journalists and other professional experts.
Palacio, who earned the rank of Lieutenant Governor during the program, said it was a great experience.
“The first biggest takeaway that I have is that every citizen’s vote in a democracy matters and bipartisanship is an effective method to passing legislation,’’ said Palacio. “Second, I began to realize that citizens are not attracted to a candidate whose campaign is fueled by arrogance and narcissism. Third and most importantly, I learned that every moment of every day is valuable time that must be used effectively.’’
“I thought that the program was really good,’’ said Upadhyay. “I made a lot of friends there, and I learned a lot about the government during the program. My biggest takeaway is that it is really easy to get involved.’’
“The program is intended to teach rising seniors about politics and how to solve issues in our society,’’ said Sebastian. “The program also helps us learn about the responsibilities we have as American citizens. Prior to Boys State, I knew very little about politics. This program allowed me to explore the different parts of government. The biggest thing I learned was how important it is to practice public speaking. Sharing a dorm/room for an entire week with students from all across New Jersey allowed me to bond with people I would not have known otherwise. The biggest thing I gained from the program was the great friendships I made while at Rider. Overall, I really enjoyed the experience and would highly recommend it to others.’’