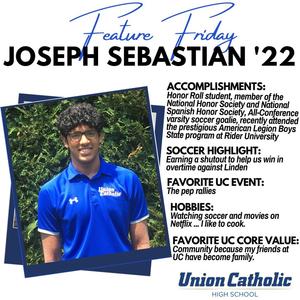 You had such a great season for UC’s soccer team last year with four shutouts and being named to the All-Conference team in your first season playing varsity goalie. Can you tell me what it meant to you to be named All-Conference and your thoughts on the season you had?

The award meant so much to me. My coaches and teammates pushed me to be my best last season and, thanks to them I was named to the All-Conference team.

What do you consider your greatest strengths as a goalkeeper?

My biggest strengths are my height and saving ability. I also think my communication is important because it helps my teammates play better and prevent mistakes.

When and how do you get started playing soccer. I imagine you’ve been playing since

I started playing soccer when I was 4 years old. My brother played and I wanted to be like him.

Most soccer players play lots of different positions when they first start playing at a young age? How about you?

When I was younger, I just played whatever position the team needed. Usually, I would play as a goalie, but sometimes I would play defense or on the wing.

When and how did you become a full-time goalie?

I only became a full-time goalie in my freshman year at Union Catholic. The team suffered a few injuries which left the goalkeeper position open on JV, so I volunteered for the spot.

There is so much pressure on goalies, especially when a game comes down to PK’s. What does that feel like as a goalie and how do you handle that pressure so well?

Obviously there is a lot of pressure on goalies during penalties, but you can’t let that get to you. I just try to stay confident and remember the things we go over in practice. Also, it helps having teammates and coaches that express their confidence in my ability.

What’s the best thing about playing soccer at UC?

The best thing about playing soccer at UC are the friends I have made over the years and sharing experiences with them.

Can you list all the awards/honors you have received at UC? Honor Roll, academic awards etc. or anything else?

You recently attended the prestigious American Legion Junior Boys State program at Rider University. Tell me about that program and what you learned.
The program is intended to teach rising seniors about politics and how to solve issues in our society,’’ said Sebastian. “The program also helps us learn about the responsibilities we have as American citizens. Prior to Boys State, I knew very little about politics. This program allowed me to explore the different parts of government. The biggest thing I learned was how important it is to practice public speaking. Sharing a dorm/room for an entire week with students from all across New Jersey allowed me to bond with people I would not have known otherwise. The biggest thing I gained from the program was the great friendships I made while at Rider. Overall, I really enjoyed the experience and would highly recommend it to others.

Can you explain how the balance between academics and sports has helped you become a better student and athlete, and how important it is to be involved in different things?

Being a student athlete has shown me how important it is to manage my time. Between school and soccer, it can be hard to balance my responsibilities, but it has forced me to work harder to get things done. It is important to get involved in different activities because it can help you to learn about yourself and allows you to explore different interests.

I know that between school and sports, there isn’t a whole lot of time left for you to do other stuff. Just curious if you are involved in any clubs or other activities at school or out of school?

School and sports take up a majority of my time, so I do not participate in many activities outside of school. I am also a member of the Spanish and Portuguese Club at UC.

What do you love the most about being a student at Union Catholic?

My favorite thing about being a student at UC is that teachers and faculty always want us to succeed. They care about the students and push us to improve.

Why and how did you decide that UC was the place for you to be? What was it about UC that made you want to be a student here?

Being in a Catholic school since preschool, I felt it was best for me to continue my Catholic education in high school. I wanted to choose a school that would provide me with the best education and would prepare me for life in college. Overall, the main reason I chose UC was because of how welcoming it was and the sense of community among the people here.

What kind of advice would you give to younger students who are considering attending UC? Why should they come to UC and what will UC give them that they won’t be able to find at other schools?

My advice to students considering UC is to pick a school that will help you become the best version of yourself. Union Catholic will provide you with a great education and a caring faculty that will help you prepare for the future in a way other high schools can’t.

Have you thought about your future as far as what you’d like to major in when you get into college, what type of career you’d like to pursue?

What are your biggest goals in soccer for your senior year?

My biggest goal would be to win counties or the division with the team this year. I would also like to be named to the All-Conference Team again in my senior year.

What is something about yourself that most people don’t know? Maybe a hidden talent or hobby?

One thing about me that most people don’t know is that I like to cook.

Favorite thing to do in your spare time?
My favorite things to do in my spare time is watching soccer and movies on Netflix.
Favorite class and teacher at UC?

Earning a shutout to help us win in overtime against Linden on their Senior Night.

Favorite UC Core Value and why?

Community because my friends at UC have become family

One word to describe your UC experience?

Enjoy your time at UC and make sure to take opportunities, so you graduate with no regrets.