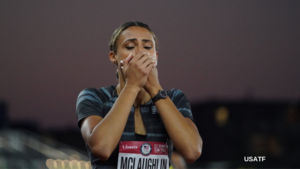 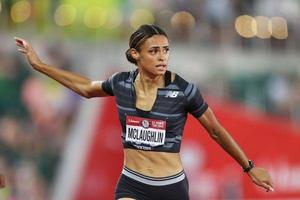 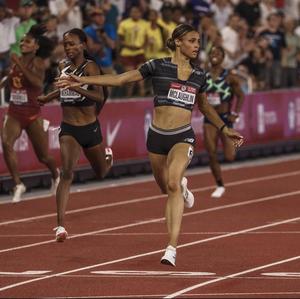 Scotch Plains, N.J. - McLaughlin, a 2017 graduate of Union Catholic, ran 51.90 to win the 400-meter hurdles and earn a spot on her second Olympic Team

Sydney McLaughlin, who shocked the track and field world when she made the 2016 U.S. Olympic Track and Field Team at the age of 16, produced another jaw-dropping performance when she smashed the World Record in the women's 400-meter hurdles at the U.S. Olympic Trials on Sunday night at Hayward Field in Eugene, Oregon.

The 21-year-old McLaughlin, a 2017 graduate of Union Catholic, stopped the clock at a mind-numbing 51.90 to take down the world record of 52.16 that 2016 Olympic gold medalist Dalilah Muhammad set in 2019. With her victory, McLaughlin secured a spot on her second U.S. Olympic Team..

In one of the most eagerly anticipated matchups of these Olympic Trials between the two fastest 400 hurdlers in the history of the world, Muhammed, who set the world-record when she edged McLaughlin, 52.16 to 52.23 at the 2019 World Championships in Doha, had a slight lead on McLaughlin as they came over the eighth hurdle. But McLaughlin pulled even with her archrival as they went over the ninth barrier, and then put it into another gear and slammed the hammer down coming off the final barrier to complete the breathtaking victory!

When McLaughlin saw her time flash up on the big board, she threw her hands on her head and then over her mouth in utter disbelief, as I'm sure everyone watching did! She then squatted on the track as she soaked in the historic moment. Muhammad was the first person to congratulate McLaughlin.

Muhammed finished second in 52.42, and Anna Cockrell of USC, who won the NCAA 100m HH and 400m hurdles earlier this month, placed third with a PR of 53.70 as they joined McLaughlin on the Olympic Team.

In 2016, McLaughlin finished third in the 400 hurdles at the Olympic Trials to make the Olympic team, and then she became the youngest U.S. athlete to compete in track and field at the Olympics in 44 years when she advanced to the semifinals in Rio.

But unlike five years ago when she was a precious teenager just happy to qualify for the Olympics, McLaughlin, who now runs professionally for New Balance, will head to the Tokyo Olympics (scheduled for July 23-August 8), as the favorite to win the gold medal in the 400 hurdles. McLaughlin is also expected to be part of the U.S. 4x400 relay team in Tokyo. She ran on the gold medal winning 4x400 at the 2019 World Championship

To give you an idea of how fast 51.90 in the 400 hurdles is, McLaughlin's 51.90 would have been fast enough to qualify for semifinals of the flat 400 at the Olympic Trials!

McLaughlin, who will turn 22 on Aug. 7, has been building toward this moment ever since she burst on the scene as a record-breaking freshman at Union Catholic, where she broke the state indoor record in the 300m in her first high school race ever at the Bishop Loughlin Games at the 168th Street Armory in December of 2013. She went on to put together the greatest high school career in U.S. history.

McLaughlin finished her high school career with 13 national titles (7 individual/6 on relays), a state record tying 11 N.J. Meet of Champions titles, 7 state records, four national records, one World Junior record, and became the only athlete t ever be named the Gatorade National Athlete of the Year two straight years (2016-17). She was also MVP of the Penn Relays in 2017  when she ran the two fastest high school 400 splits in meet history, and she became the only high school girl in U.S. history to split under 50 when she blasted a 49.85 anchor carry to rally Union Catholic from sixth to first in the Swedish Relay with a national record at the 2017 New Balance Nationals.

After graduating from UC in 2017, McLaughlin went on to the University of Kentucky where she had one of the greatest one and done seasons in NCAA history.

McLaughlin put the finishing touches on her remarkable freshman year at Kentucky at the 2018 NCAA Championships when she won the 400 hurdles in 53.96, and about an hour later splitting 50.03 on the fourth place 4x400 relay to help the Wildcats finish fourth in the final team standings. After the NCAA Championships, McLaughlin announced her intention to turn pro.

McLaughlin's first coach when she turned pro was Olympic gold medalist Joanna Hayes, but earlier this year she announced she's had switched coaches and was working under veteran coach Bobby Kersee.

Kersee had McLaughlin focus on the 100 hurdles for most of this season to improve her speed and technique. She ran five 100 HH races, including a PR and Olympic Trials qualifying time of 12.65, before her first 400 hurdle race of the season three weeks ago.

McLaughlin credited Kersee for preparing her for this Olympic year.

"All of the glory to God,'' McLaughlin said during her post race interview with NBCSN. "Honestly this season, working with my new coach and new support system is truly about faith and trusting the process. A lot of things you really can't see coming, but just having that childlike faith and just trusting that everything's going to work out. Bobby's really good at that and I'm really happy that I chose to go with him."

Here is a look at McLaughlin's 400 hurdle progression