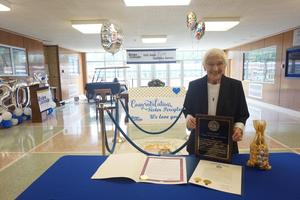 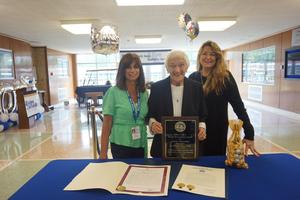 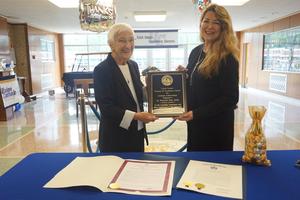 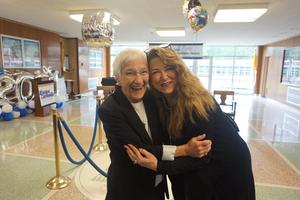 Scotch Plains, N.J. - Sister Percylee is the recipient of the 2020-21 Lifetime Achievement Award from the Union County Commission on the Status of Women.

Sister Percylee Hart, RSM, the Principal of Union Catholic for the last 41 years, received her award on Thursday for being chosen as the recipient of the 2020-21 Lifetime Achievement Award from the Union County Commission on the Status of Women.

Sister Percylee will be honored at a virtual event at 6:30 p.m. June 11. The virtual awards ceremony is free for all to attend but pre-registration is required. Residents who wish to pre-register can do so by visiting bit.ly/uccsw2021.

“For over 25 years, the Board of County Commissioners has recognized women among us who lead, serve, and inspire. Through their work, they raise awareness about the influence of women in every sphere of the Union County community, from business and legal affairs to public service and education,” Commissioner Chairman Alexander Mirabella said in a statement. “We are proud to acknowledge their contributions towards a positive difference in the quality of life for everyone in the County.”

Sister Percylee is very humbled by this honor.

“I am very thankful and humbled to be selected as the recipient of the Lifetime Achievement Award, said Sister Percylee. “I would like to congratulate and commend all honorees who are being recognized.’’

“I am pleased to accept this award on behalf of our entire Union Catholic Community who support me day in and day out in my leadership role of serving as Principal of Union Catholic High School. My role as Principal is understandably recognizable, but my achievements are the result of the commitment, collaboration and excellence demonstrated every day by Union Catholic faculty and staff.

“It is our shared vision to provide each student with a quality education in a faith-based environment. Our goal is to graduate academically successful young men and women who demonstrate our core values of responsibility, respect, honesty, community and compassion. This fusion of education and moral foundation allows our students to take their place as good citizens and leaders throughout Union County and beyond. As I accept this award whose tenet is “leadership, service and inspiration,” I thank God for blessing me with the opportunity for more than 40 years to serve in a way that has inspired students, especially young women to pursue opportunities that were not open to them before.

Sister Percylee’s determination upon becoming Principal allowed for the successful merger of the Union Catholic Girls and Boys Schools. Sister Percylee has been the catalyst for every major advance that the school has made since 1980. Her progressive initiatives have positioned Union Catholic as one of the premier Catholic high schools in the state.

Sister Percylee is very proud of the growth Union Catholic has made during her long tenure as the leader of the school, and credits a great support system for the continued success of Union Catholic.

“It is my hope and prayer that Union Catholic will always foster our students’ growth enabling them to lead, serve, and inspire as our future leaders making a positive difference in the quality of life for everyone in their sphere of influence,’’ said Sister Percylee.

It gives Sister Percylee tremendous satisfaction to see how far women have come during her four-plus decades at UC.

“I’ve been blessed with the opportunity to serve over so many years, which has enabled me to provide the modeling of leadership for young women to go forward in areas that weren’t open to women before,’’ said Sister Percylee.

Sister Percylee has created an environment at Union Catholic to ensure that her students are good people.

“Students receive their foundation in education through their high school experience, and they are also formed to be good citizens through our core values of responsibility, respect, community, honesty and compassion. The fusion of education and moral foundation at Union Catholic allows our students to take their place as good citizens and leaders throughout Union County and beyond. My call is to grow and stretch the limits of our students, and be all that God calls them to be. When I step back and think about it, this journey has been so rewarding.’’

Prior to UC, Sister Percylee was the Principal of Red Bank Catholic High School from 1970-1980. She serves as a member of the Advisory Committee and the Controversies Committee of the New Jersey State Interscholastic Athletic Association (NJSIAA), and is currently a member of the St. Bartholomew Academy Advisory Board.

Sister Percylee was also President of the Newark Archdiocese Regional Principals Association, is a former Chairman of the Board at Georgian Court University, her alma mater, and she served as the President of the Middle States Association of Colleges and Schools, and as the First Vice President on the Board of Directors of the Washington Rock Girls Scout Council.