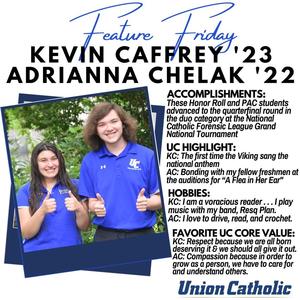 Scotch Plains, N.J. - The dynamic duo teamed up to reach the quarterfinal round at the National Catholic Forensic League Grand National Tournament
In our latest installment of Feature Friday, we shine the spotlight on Union Catholic sophomore Kevin Caffrey and junior Adrianna Chelak.
Caffrey, who lives in Woodbridge, and Chelak, who lives in ?, teamed up to advance all the way to the quarterfinal round in the duo category at the National Catholic Forensic League Grand National Tournament this past weekend. There were more than 300 entries in the duo category, and Caffrey and Chelak made it to the final 24, a remarkable accomplishment.
Here is our Q and A with Caffrey and Chelak.
What does it mean to you to have reached the quarterfinals of the Grand National Tournament? It’s a remarkable achievement to advance that far!
Kevin: It confirmed for me that I was pretty good at forensics and that it is something I will keep doing for as long as I can.
Adrianna: I am so completely honored to have reached the quarterfinals. Kevin and I haven’t worked on our piece for as long as some of the other competitors have. We were up against some really great competition that tackled mature issues.
What was your reaction when you found out you had advanced to the quarterfinals? Were you shocked or did you feel like you had a good chance at getting that far?
Kevin: I never would have guessed we had gotten so far so I was really ecstatic.
Adrianna: I was actually really shocked when we advanced to the quarterfinals. Especially since we had only competed twice prior to Nationals. I thought we were going to break once because we had broken at our two previous competitions. At our first competition, we placed 4th, and at our second competition, we placed 1st.
What kind of goals did you have heading into the Grand Nationals? Did you ever think you’d go as far as you guys did?

Kevin: I just wanted to try my best with no expectations of getting so far.
Adrianna: I really wanted us to break to at least Octofinals. We had broken in our past competitions, so I was confident that we’d get that far.
What do you feel was the key to your success? What worked so well for the two of you that enabled you to do as well as you did?
Kevin: The key to our success was how well we knew the piece and the chemistry we had with one another.
Adrianna: I think that this bonding truly helped us create a relationship during our duo because we were genuinely friends. This also wasn’t the first time that Kevin and I have played a couple going through a rough time. During one scene in “Mamma Mia,” we actually played a couple and acted out a divorce.
What do you love the most about Forensics and being on the Forensics team at Union Catholic?
Kevin: The communal aspect to it all. It's like one big forensics family.
Adrianna: This was my first year on the Forensics team. I loved how supportive all of the coaches were and how they were proud of us, no matter what.

What do you love the most about being a student at Union Catholic?

Kevin: The upbeat feeling I still get when I enter the building
Adrianna: I love being a part of the legacy of Union Catholic. When you tell someone that you go to UC, they immediately know that you’re getting a quality education and genuinely enjoying your high school experience.

Could you list all the awards/honors you have received at UC? Honor Roll, National Honor Society, academic awards etc?.

Can you explain how the balance between academics, and extracurricular activities have helped you become a better student, and how important it is to be involved in different things?

Kevin: It's important to be involved in things you enjoy so that you get the most out of your experiences at UC. And learning to balance them is an important skill for adult life.
Adrianna: I think that this balance has truly prepared for the real world and made me a well-rounded person. When we go off to college and into adult life, we’re going to have to juggle work and our personal lives. Being involved in different things is super important because it lets you meet new people and create different types of relationships.

Why and how did you decide that UC was the place for you to be? What was it about UC that made you want to be a student here?

Kevin: I always knew I would attend UC, but I was really excited about the familial aspects I knew the school had.
Adrianna: When I came for Freshman for a Day, I just had a feeling that I would thrive here. One thing that I really loved was that there were so many alumni that came back to work UC. No one would work at their old high school if they didn’t love their experience.

What kind of advice would you give to younger students who are considering attending UC? Why should they come to UC, and what can UC give them that other schools can’t?

Kevin:  Come to UC because no other school gives you so many opportunities.
Adrianna: I would tell them to definitely check out Freshman for a Day and go with their gut from there. UC has so much to offer that other schools don’t. We always use technology, which prepares us more for our future and sets us up to thrive in the real world. Along with that, we have a very loving student body that supports you from the beginning. I met some of my best friends from UC before our official first day. Everyone is just so friendly.

How about your plans for the future? Have you thought about what you’d like to study in college and what type of career you’d like to pursue?

Kevin: I'd like to pursue acting and English and have a career that revolves around those things.
Adrianna: Haven’t really decided on a specific major, but I’ll probably go into something to do with the arts.
What is something about yourself that most people don’t know? Maybe a hidden talent or hobby?
Kevin: I am a voracious reader.
Adrianna: I can bend my pinky back to the point where it’s almost touching the back of my hand.
Favorite thing or things to do in your spare time?
Kevin: I play music with my band, Resq Plan.
Adrianna: I love to drive, read, and crochet.
Favorite class and teacher at UC?
Kevin: Writing with Mr. Rotondo
Adrianna: AP US History with Dr. Sagendorf
Favorite moment at UC?
Kevin: The first time the Viking sang the national anthem.
Adrianna: I have a few favorite moments, but I will never forget bonding with my fellow freshman during the auditions for “A Flea in Her Ear.”
Favorite UC Event?
Kevin: The Fall Play
Adrianna: Cabaret Night
Favorite UC Core Value and why?
Kevin: Respect because we are all born deserving it, and we should all give it out.
Adrianna: Compassion because in order to grow as a person, we have to care for and understand others.
Life Motto?
Kevin:  All things must pass.
Adrianna: Everything happens for a reason.
One word to describe your UC experience?
Kevin: Unforgettable
Adrianna: Eventful
Share one tip for members of UC’s Class of 2025?
Kevin: You always have people to talk to when you're in need.
Adrianna: Take every opportunity that you are given.