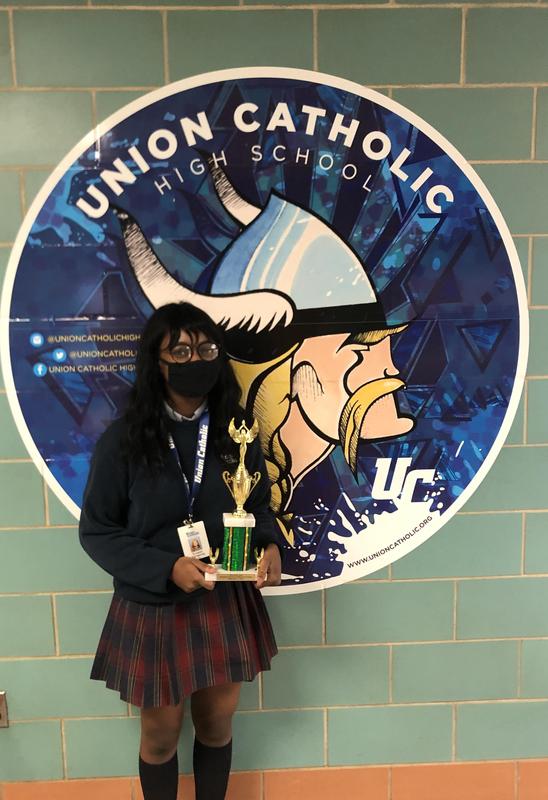 Scotch Plains, N.J. - Agyapong is a junior at Union Catholic
Yvonne Agyapong received incredible news earlier this week when she was notified that she had been chosen to attend the very prestigious New Jersey Scholars Program.
The junior at Union Catholic was so excited that she simply couldn't contain herself.
"I was paralyzed for a moment, and then I screamed so much that my mom came out to check on me,'' said Agyapong. "Then I emailed my counselor and my recommenders to thank them.''
The New Jersey Scholars Program, hosted by the Lawrenceville School, is a tuition-free five-week summer program for rising high school seniors in New Jersey. The program, scheduled for June 27-July 30, selected just thirty-nine Scholars from among the semifinalists.
The mission of the New Jersey Scholars Program is to reach out to able and enthusiastic students who come from a broad cross-section of the state’s population. The program creates an intense, interdisciplinary intellectual experience that will change students’ lives by teaching them to think in a new way — relating disciplines instead of dividing them. Scholars participate in lectures and small-group seminars where they actively engage with the disciplines. They also have extensive reading assignments, and pursue research at world class libraries and museums. They write essays and work closely with a faculty member to produce a 10-15 page interdisciplinary research paper. They are also stretched as they hone their creative talents in art, music, writing, drama and public speaking by contributing to an Arts Festival that is thematically related to the Program topic.
"I can’t even put into words what becoming a New Jersey Scholar means to me,'' said Agyapong. "When I was considering applying to just be a nominee for Union Catholic back in November, I was disappointed that I wouldn’t even get far enough in the process to attend such an amazing program. I just didn’t think it would be possible to be selected given it’s prestige and how many excellent candidates there may have been throughout the state. However, now, given the honor, I’m just over the moon to be considered among this group of students! It’s very validating, especially when you have to work so hard.''
Agyapong is one of most active students at Union Catholic.
She's a Student Ambassador, the Vice President of the Junior Class, President of the Multicultural Club, a member of the National Honor Society, Students For Human Dignity, the Student Advisory Board, the Forensics Team, the African-American Appreciation Club, the Connection Crew, and the Environmental Club. Agyapong is also an Honor Roll Student.
Agyapong said there are many people to thank for helping her achieve this great honor.
"I’m so thankful for Union Catholic’s help in getting me to this point,'' said Agyapong. "In all honesty, I had never heard of the program prior to being informed by Mrs. Jakubik and Mrs. Dixon in School Counseling in November. There was no way I could have completed my application and moved along in the process without my recommendations from Dr. Sagendorf and Mr. Luciano. Most importantly, I couldn’t have done any of this without my guidance counselor Sister Donna Jo Repetti, who has been such a great supporter while I have been applying to summer programs. I’m just so thankful for the administration for even choosing me as a nominee for Union Catholic and putting me on this path here.''
Published April 6, 2021 Print