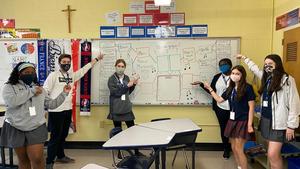 Scotch Plains, N.J. - Manie Musicale includes participation from over 2000 schools from all 50 states, Washington, D.C., Australia, Bermuda, Canada, Egypt, England, France, Ireland, Mexico, New Zealand, and the United Arab Emirates.
For the second year in a row, Madame Ciringione’s French students at Union Catholic have been participating in Manie Musicale, a song competition based on brackets similar. It’s their own version of March Madness.,

“By connecting to other French teachers on social media, I am able to participate with other world language educators and also give input to activities such as this one” says Ciringione.

Manie Musicale started with two French teachers from Maine (Stepanie Carbonneau and Michelle Fournier) in 2017, who were inspired by the Spanish version that came first – Señor Ashby’s “Locura de Marzo.”

Students fill out brackets to try to predict which of sixteen songs will be the “vainquer.” Once the tournament starts, students vote for their favorite songs in daily matchups to see who wins. Songs include a variety of contemporary Francophone artists from around the world. According to the Manie Musicale site as of March 2, the 2021 Manie Musicale includes participation from over 2000 schools from all 50 states, Washington, D.C., Australia, Bermuda, Canada, Egypt, England, France, Ireland, Mexico, New Zealand, and the United Arab Emirates.

Mme Ciringione said, “It’s so wonderful to see our school on a map with 2,000 other schools. I think my students enjoy this activity for many reasons. They are exposed to various French and Francophone artists and genres of music. They see that we are connecting to so many other students in the United States, Canada, and all over the world who are all working on the same activity. My upper level students also have projects with Manie Musicale such as looking at the meaning of the lyrics and tying them into their everyday lives. With my lower level, students looked at the artists, song titles, and whether or not they liked the songs why or why not.”

The competition ends on April 5th and the student or students with the highest points will of course receive bragging rights and a special prize from Madame,

Junior Meghan Schirm said, “My French class and I have been participating in “Manie Musicale” for the past two years, and I now look forward to it every spring! As we listen to each of the songs and complete our brackets, I feel as though I am growing closer to the French culture. I even find myself feeling competitive with my friends to see if our brackets are correct. It is almost like the March Madness of French music!’’

“Music is a way to enhance student engagement especially during this academic school year where we have remote and hybrid learners,’’ adds Madame Ciringione. "It is a way to introduce new phrases and cultures. This year’s songs are not only catchy, but also positive and uplifting. Manie Musicale is becoming a tradition here in room 106, and I hope to continue participating in years to come.’’