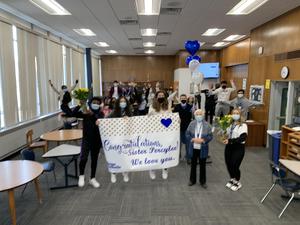 Scotch Plains, N.J. - Sister Percylee has been the Principal since 1980

Sister Percylee is one of just three award winners who were chosen out of nearly 6,000 Catholic School Principals.

The announcement came via Zoom this past Thursday when Sister Percylee, surrounded by several students, was notified by Kathy Mears, the Interim President and CEO of the NCEA. The announcement touched off a big celebration at the school.

Sister Percylee was nominated through a video that was submitted that showed all the different ways she unites, inspires, and ignites the UC community.

“Her video nomination was selected, and Sister then did an interview with NCEA personnel who found her to be caring, professional and energetic in her mission of educating students in the faith.’’

Sister Percylee was shocked and humbled when she received the news.

“I thought I was here for a second round of interviews,’’ Sister told Mears. “Wow, I am truly humbled by this recognition, and I’m happy to accept it on behalf of all of us here at Union Catholic because our success is bound together by our Community, and I can only be the best that I can because all those around me enable that.

“Sister, you wowed the committee,’’ Mears said. "They said you had to be one of the winners because you have more energy and more vision than anybody. We are so grateful for you bringing these children to God. It’s wonderful work, and we are so glad to be your colleague.’’

Sister Percylee said this award is for the whole UC Community.

“When I accepted this award, I took it for the entire UC Community because it has an impact on all of us,’’ said Sister Percylee. “This would never occur without our wonderful Community here at Union Catholic. To receive an award like this is a big burst of positivity, and I’m very grateful to the NCEA for choosing me.’’

Sister Percylee said everything she’s accomplished since taking over at Union Catholic as Principal in 1980 has been God’s will.

“God touched me as a young child, and this was the journey that I was called for,’’ said Sister Percylee. “I always said that if I was the one selected for Principal of what would be the merged Union Catholic, it was definitely God’s will, and it’s been a fantastic growth opportunity and journey for me. It's been a gift.’’

Sister Percylee has always maintained the same message for her students, faculty, and staff.

“My message has always been that everyone has gifts and talents, and they are different,’’ said Sister Percylee.  “Everyone needs the opportunity to grow them and become all God calls you to be. I feel that over the years here at Union Catholic, we’ve created an environment for that to happen, and that fills me with joy. It’s very energizing.’’