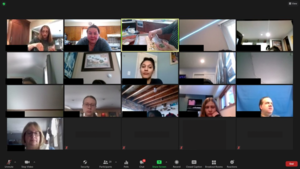 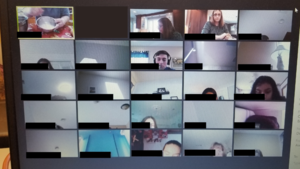 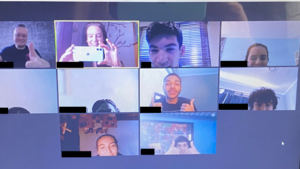 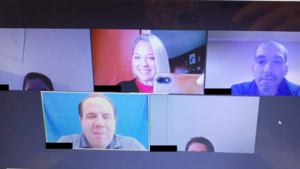 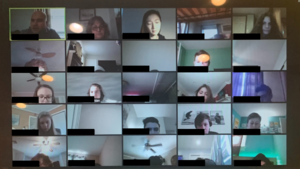 Scotch Plains, N.J. - Several student leaders helped organize the activities
Union Catholic has always prided itself on the diversity of its student body, and at the most recent Schedule Dedicated to Student Needs (SDSN), the school held a Cultural Diversity Celebration for students and faculty to learn about each other's heritage.

With several student leaders helping to organize the day, there were class meetings, and several activities and presentations that were very well attended. Students and faculty engaged in a variety of cultural topics. There was also a drawing for a pair of prizes to cap off the festivities. Senior Gillian Caldas and sophomore Meghan Sherer were the prize winners.

Among the activities were presentations on the contributions to American music by Black, Latino and Asian Americans, the Great Migration of African Americans, and identifying instances of microagressions and how to address them. Students also participated in several activities that celebrate Black History Month, and there were cultural conversations where students were able to share their traditions.

Caldas was very impressed with how the day went.

“Personally, I believe the entire day was extremely well-thought-out, and offered tons of ways to become involved,’’ said Caldas. “The class meeting served as an introduction to the day's plans followed by multiple periods and activities to engage in. I chose to attend the Polish/Italian cooking and NJ Trivia, which allowed me to not only learn further about our state but also dive into cultures worldwide. However, my favorite memory of the day was watching the UC Community share facts about their own cultures. Therefore, by partaking in these activities that UC planned, I was truly able to understand that UC provides an environment that focuses on celebrating all students and their backgrounds.’’

Caldas said her favorite activity was the cuisine session.

“My favorite activity of the day would have to be learning about the Italian and Polish culture through cuisine from Mrs. Raite, Mrs. McLaughlin, and Mrs. Rose,’’ said Caldas. “The dishes looked so delicious that I had to make them after the presentation on my own! I believe the Cultural Diversity Day was very successful and provided numerous ways to become informed and celebrate many different cultures. We were all able to learn several factors contributing to our cultures, including traditional dishes, dances, stories, history, and conversation.’’

Caldas said she’s grateful that Union Catholic provided its students with a chance to celebrate their backgrounds.

“I am extremely grateful that UC offered a Diversity Day to celebrate all cultures and backgrounds of students,’’ said Caldas. “In addition, I am even more thankful for the opportunity UC provided in allowing students to become involved in constructing elements of the day such as compiling segments of my peers explaining their traditions, descents, and cultures. As our current outside world is experiencing hardships and obstacles concerning social justice issues, it was fulfilling to see how UC was able to unite all students and create an opportunity where we could all learn something from one another, which I truly valued.’’

Caldas said winning a prize was a great surprise.

“After partaking in a fun-filled day, I was even more excited to find out I had won a prize for the Diversity Day drawings,’’ said Caldas. “I was not expecting to win, but it was an added surprise to the already rewarding day I had spent with my teachers and peers.’’

Sherer said her biggest takeaway was how united the UC community is.

“I think that the day went very well, and was extremely successful,’’ said Sherer. “I think that the activities that were offered were very much enjoyed by my fellow peers. One of my biggest takeaways from this SDSN day was how everyone from the UC community comes from all different backgrounds, yet we are so united as a community. I found that really cool! I think that the student turnout was very good. After the day was finished, many people were saying how great the activities were and how much they learned about other cultures.

Sherer was also impressed by how organized the day was.

“You could tell that many hours of work was put into this day to make it how it was,’’ said Sherer. “I think that every student who attended this SDSN day learned something new about each other. I enjoyed how you could talk with students in other grades about their culture and traditions. This not only helps you meet new people, but find appreciation for other cultures besides your own. I am very thankful that the school offered a day that celebrated cultures. It is vital to share your culture and be able to talk about your background without hesitation. All of the activities that were offered allowed students to share personal stories about their culture as well as listen to other peers talk about their heritage.’’

Sherer was obviously excited about winning a prize.

“When I found out I was one of the winners of the prize drawing, I was very excited,'' she said. “I have the worst luck when it comes to things like this, so I was super excited to hear that I finally won something. Besides winning, I thought it was very clever that two lucky people could win the gift cards. I think that the bingo board was very successful because you got to visually see how much you accomplished and learned that day. Also, I think that the prizes allowed for a greater student turnout.’’

John Becht, a Campus Minister at UC and a Social Justice advocate, said the day was a great success.

"As a whole, I feel that the day went very well,'' said Becht. "I think our goal of offering our students an opportunity to identify and to celebrate the topic of cultural diversity was obtained. I believe the variety of activities offered really speaks to the passion and team mentality of our faculty and students. Students had the chance to join light-hearted and fun activities if they wished. They also had the chance to join meaningful discussions as well. It was just a well-rounded offering of activities that hopefully provided something for each and every student. That was shown in the attendance of the students. We had some activities that were packed, and we had others that had smaller numbers, but allowed for in-depth conversations. One thing we've always acknowledged at UC is our cultural diversity among our student population. The Cultural Diversity Celebration SDSN was a day to step back and really become aware of the diversity. I feel it is real important that the more we truly get to know one another (which includes our individual heritage) the closer we will become as a community.''