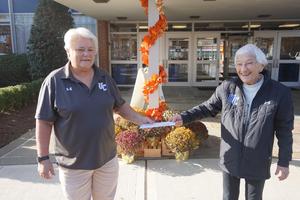 Scotch Plains, N.J. - Shelly is currently the Laptop Technical Administrator at Union Catholic
As part of Union Catholic’s celebration of service anniversaries, we are taking an inside look at each faculty/staff member who is being honored.
Here is the latest profile -
Service Anniversary Honoree: Shelly Jacques
Years of Service: 40
Positions at UC: After teaching math at UC for 20 years, Shelly has worked in the Technology Department for the last 20 years. She is currently the Laptop Technical Administrator. She has also served as the J.V. and varsity softball coach and the bowling coach at UC
Education: Graduated from J.P. Stevens High School in 1976 where she played softball, soccer, basketball, and competed in track and field.
Graduated from Kean University in 1981 with a BA in mathematics. She was a star outfielder on the softball team, which was coached by current girls basketball coach Kathy Matthews.
Journey to UC: “I was working at Bamberger’s in Menlo Park when Kathy Matthews (her softball coach at Kean and softball teammate on a semi-pro team) came in to buy something. She was teaching and coaching at UC and told me there was two math openings at Union Catholic. I started working here the Monday before Thanksgiving in 1981.’’
What do you love the most about working at UC? “When my dad died in 2008 this place was my family. UC was there for me and I’ll never forget that.’’
Favorite moments during your time at UC? “When I hired a chicken to surprise Mike Marotti (the Assistant Vice Principal at the time) on his 44th birthday on Dec. 2, 1991. He came walking into the faculty lunchroom and there she was dressed like a chicken. With the room packed with faculty, she sat right on his lap. It was something I just did out of the blue. I thought he was going to kill me.’’
“We had the softball field (the current JV field) built in 1988. It was just a big open field, but we got a field built that was our varsity field at the time.’’
Did you know: Shelly was the coach of the UC softball team when the Vikings won its only Union County Championship in 1989.Shelly and her father ran a secretarial service for bowling scores, and Shelly once bowled a perfect game of 300.
Favorite thing to do in spare time? Go to Atlantic City and play the slot machines, and other games of chance.
Favorite UC Core Value: “Community. Union Catholic has always been like family to me.’’
Published November 23, 2020 Print