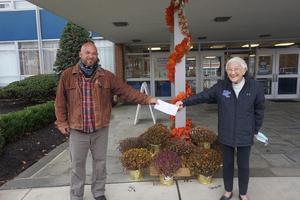 Scotch Plains, N.J. - Jim teaches AP Calculus and Cisco/Programming, serves as the moderator of the Chess Club, and is the Network/Systems Administrator at UC
As part of Union Catholic’s celebration of service anniversaries, we are taking an inside look at each faculty/staff member who is being honored.
Here is the latest profile -

Positions at UC:Teaches AP Calculus and Cisco/Programming, serves as the moderator of the Chess Club, and is the Network/Systems Administrator.

Education: Graduated from Union Catholic in 1997. Was a member of the UC’s Performing Arts Company, Ski Club, Peer Ministry, and the tennis team.
Graduated from the University of Scranton with a B.S. in Secondary Education Math Concentration in 2001.
Earned his Masters from Montclair State University in Pure & Applied Mathematics in 2016.

Journey to UC: “For the Fall of 1993 I was registered to attend Bayley Ellard in Madison. Mrs. Boyar (UC Bio teacher at the time) and Father Bart (UC School chaplain at the time) convinced me to attend UC instead and the rest is history.

Biggest changes you’ve seen at UC? “The biggest change is the access to the Internet. When I graduated UC in 1997, that spring UC had its first computer connected to the Internet in the Computer Lab (now second floor development office). The  second biggest change was the loss of the ping pong club, which was extremely popular in the 90’s.’’

What do you love the most about working at UC? “I’ve always considered being here more than a job, it’s like working for family after you have been here for so long.’’

What’s it like being back in the school where you were a student? “It was a career goal of mine. I love teaching at the school I attended, it provides me unique insight into the minds of my students. Though times are different, our experiences in general are rather similar.’’

Favorite moment during your time at UC? “My favorite moment will always be the time Mr. Marotti (our Vice Principal) informed me I was going to take on the new bus duty in the Senior parking lot, something we didn’t have prior. He sent a student to my classroom, room 206 at the time, at 2 p.m, 10 minutes before dismissal, with a big yellow umbrella. I asked the student what this is for and he said it’s raining out. I said I know, and he said Mr. Marotti says to open the umbrella. Well I opened it and written in red permanent marker was, “Mr. Johnston’s Bus Duty Umbrella.’’ That’s how I learned he was asking/telling me that I was going to now have that duty! It was my first year at UC as a teacher and I still have the umbrella.’’

What are you most proud of when you reflect on your years at UC? I think I have been a good steward of the network technologies within our building, and I am most proud when I learn of the successes my students have had throughout their future careers.’’

Something about yourself that most people don’t know? “I have played the piano for almost 35 years, and continue to play daily.’’

Favorite thing to do in your spare time? “Playing music with the Johnston Family Band.’’

Favorite UC Core Value: “Honesty because the ability to tell the truth is something I deeply value. It is a major part to the foundation of trust.’’