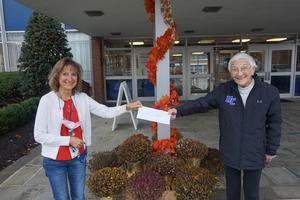 Scotch Plains, N.J. - Donna teaches all levels of Physics and Forensic Science at UC
As part of Union Catholic’s celebration of service anniversaries, we are taking an inside look at each faculty/staff member who is being honored.
Here is the latest profile -
Service Anniversary Honoree: Donna Hofmann
Years of Service: 25
Position at UC: Currently teaches all levels of Physics and Forensic Science. Has also taught Algebra I in past years
Education: Graduated from St. Aloysius Academy in Jersey City. Was a member of the Yearbook Club, Service Club, Glee Club, and the Nike Club (high-school branch of BPW-Business and Professional Women's Foundation).
Graduated from Jersey City State College (now called New Jersey City University (majored in Geoscience), and studied Geology at the University of Wisconsin.
Before UC: Worked as a bakery clerk, cemetery gardener, and a lab technician. Taught at St. Thomas Aquinas High School and Marlboro High School.
Journey to UC: “When I was working in a cemetery, I got into a conversation with a co-worker who was a Rutgers student. She was studying to be a teacher, and the idea popped into my mind that I could be a teacher, too. So literally that night, I looked in the want-ads (yes it was that long ago that there still were things called newspapers and want ads) and St. Thomas Aquinas High School was advertising for a science teacher. I applied and got the job. I worked there for many years, and then went to Marlboro High School.
“Here comes the cool part. In the summer of 1996, my husband's uncle decided to retire and the family had a big party for him, but only for adults. Since we had two small children, and no baby-sitter, my husband went alone. When he came home, he told me he had a nice conversation with his aunt's friend who was a science teacher at Union Catholic High School. I replied - Union what? I never heard of this school. I came to find out that UC was practically in the next town. Since my commute and schedule were taking a toll on my family, I started looking for a job (again in the newspaper) closer to home and maybe part-time. I found a want-ad. UC was looking for a science teacher. I applied and obviously got the job. The cool part is that after I started working at UC, I asked my husband's aunt who the woman was at her party that worked at UC. She said she didn't ever know anyone who worked at UC. I believe the mystery woman was an angel.
I never set out to be a teacher. I truly believe, no, I know, that I am a teacher because it was God-ordained. I know that I am at UC because it was God-ordained. I even tried to leave once, but God said no. God chose this ministry for me, and equipped me with what I needed to do the job. "Yet not I, but through Christ in me."
Biggest changes you’ve seen at UC? “When I started at UC, we had 12 apple computers in one computer lab that we had to reserve ahead of time. Little did I know how advanced our technology would become, and it spilled over into my own life. UC pushed me to learn and grow in ways I didn't expect. I can't believe how technically literate I am now.’’
What do you love the most about working at UC? “I'm happy that I'm free to pray with the students. The kids need God in their lives more than they know, especially now.’’
Favorite moment/moments during your time at UC. “I've met a lot of great friends and colleagues, and taught many students who have gone on to be successful engineers, doctors and scientists. I'm happy to have had a hand in that. I get a kick out of hearing from past students about their accomplishments.’’
Did you know: Hofmann once served as the moderator for the Magic Club at UC.
What are you most proud of when you reflect on your years at UC? “I often have students who think they can't handle physics, and want to drop the class. But I'm proud when I can recognize their potential and encourage them to press on, and help them find the strength in themselves that they didn't know they had. I'm proud when I get thank you cards and letters from them, telling me how well they are doing in their colleges and careers.’’
Something about yourself that most people don’t know? “I am an outdoors kind of person. I spent three months hiking and camping in the Rockies by myself, and I love Wisconsin football!’’
Favorite things to do in your spare time? “I like to walk daily. I also like to bake, but probably enjoy eating the baked goods more!’’
Favorite UC Core Value and why: “Community, because no one falls through the cracks at UC.’’
Published November 18, 2020 Print