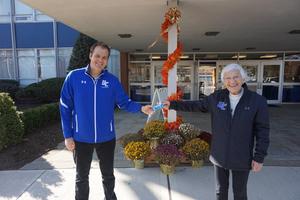 Scotch Plains, N.J. - Dr. Sagendorf teaches history, serves as the Director of Transportation, is the Head Forensics Coach, and is a Director for UC’s Performing Arts Company
As part of Union Catholic’s celebration of service anniversaries, we are taking an inside look at each faculty/staff member who is being honored.
Here is the latest profile -
Service Anniversary Honoree: Dr. Edward Sagendorf
Years of Service: 10
Positions at UC: Teaches history, serves as the Director of Transportation, is the Head Forensics Coach, and is a Director for UC’s Performing Arts Company.
Education: Graduated from Union Catholic in 2007. Was a member of the UC Performing Arts Company, Forensics, Book the Club, National Honor Society, and the World Language Honor Society.
Graduated from Montclair State in 2011 with a BA in History Education. Earned a BA from Seton Hall University in History in 2015. Earned a Doctorate in Ed.D Educational Leadership from St. Elizabeth University in 2020.
Before UC: Projectionist/Manager – Union Theaters, Union, N.J. Playground Supervisor – City of Elizabeth, Elizabeth, N.J.
Journey to UC: “Throughout college I helped direct the musicals with Mare Carolan and judged/coached forensics. During my senior year in college, Dr. Reagan approached me after a play rehearsal day and asked if I was interested in applying for a job at UC. The position was Director of Transportation/Social Studies teacher. I went through the series of interviews and happily got the job. I began working with the Transportation Department in May 2011. My teaching career began that following fall.’
What do you love the most about working at UC? “UC is like a second home. I’ve made many lifelong relationships in this building. The administration is very supportive and allows you to grow as an educator. The faculty are amazingly talented and friendly. I’m blessed to work with them. The students are the reason I show up every day. Their positive energy, humor, and enthusiasm make me strive to be the best educator I can be at all times.’’
Did you know: Dr. Sagendorf meet his wife, Kathleen, during orientation day at the start of the 2011-12 school year, which was the first year at UC for both of them as teachers.
Among the many roles that Dr. Sagendorf played in PAC performances, he starred as Osgood Fielding in the musical, “Sugar’’, and played the Mayor of Whoville in the musical, “Seussical.''
Favorite thing to do in your spare time? “Dancing to “Baby Shark” with my son, Henry.’’
Favorite UC Core Value: Community
Published November 17, 2020 Print