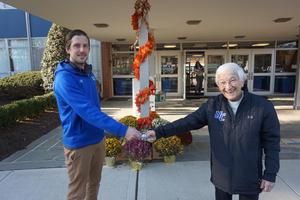 Scotch Plains, N.J. - Brian teaches physical education and is an assistant cross-country and track and field coach at UC
As part of Union Catholic’s celebration of service anniversaries, we are taking an inside look at each faculty/staff member who is being honored.
Here is the latest profile -
Service Anniversary Honoree: Brian Kopnicki
Years of Service: Five
Position at UC: Physical Education instructor, assistant cross-country, and indoor and outdoor track and field coach.
Education: Graduated from Scotch Plains-Fanwood High School in 2004. Was a star distance runner for the Raiders, winning the Union County Cross-Country Championship in 2003.
Graduated from The College of New Jersey in 2009. Was a three-time All-American at TCNJ.
Currently attending graduate school at Seton Hall University for school counseling.
Before UC: Taught and coached at Montville High School, and taught in Elizabeth.
Journey to UC: “About 10 years ago I ran into Mike McCabe’s cousin, Mark Del Monaco (now the head track and XC coach at Minot State in North Dakota), at the President’s Cup road race and he told me that UC needed an assistant cross-country coach and someone to run with DJ Thornton,’’ said Kopnicki.
After being an assistant XC and track and field coach at UC for a few years, Kopnicki took a teaching and coaching job in Montville before returning to UC as a physical education teacher and assistant cross-country and track and field coach in 2016. That was the same year that UC student Sydney McLaughlin made the U.S. Track and Field Olympic Team.
“During Sydney mania when she was running in Rio at the Olympic in 2016, I came to the Olympic Village here at UC and it was such a cool environment,’’ said Kopnicki. That’s when I got hired full-time.’’
What do you love the most about working at UC? “My co-workers.’’
Favorite moment/moments during your time at UC? “Going to Chinatown with the international students for the Chinese New Year.’’
Something about yourself that most people don’t know? “I played the bass in a punk band in high school. It was called, “No Exit.”
Favorite thing to do in your spare time? “Watch a good movie with my family.’’
Favorite UC Core Value: Community
Published November 13, 2020 Print