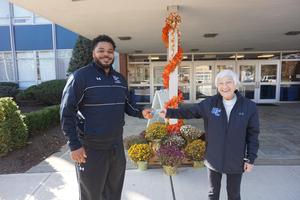 Scotch Plains, N.J. - Marcus, a UC graduate, is head of security at Union Catholic
As part of Union Catholic’s celebration of service anniversaries, we are taking an inside look at each faculty/staff member who is being honored.
Here is the latest profile -
Service Anniversary Honoree: Marcus Sancho
Years of Service: Five
Position at UC:  Head of security, janitor, volunteer coach for the throws for the track and field team, and drives swimming, boys lacrosse, and golf teams to practice when needed.
Education: Graduated from Union Cathlic in 2011.Threw the shot put and discus on the track and field, and is the former school record holder in the indoor shot put. Served as the team manager for the UC basketball team.
Neosho County Community College (2011-2012).
Union County College (2012-current)
Before UC: Worked at GNC, Lord & Taylor, Piscataway Pizza, and security at numerous bars/clubs.
Journey to UC: “I came to UC to pick up a transcript so I could attend trade school. At the time I was fully licensed for security and I mentioned that to Dr. Reagan and Sister Percylee. Two or three days later they called me and hired me full time for security. A blessing I’ll always be thankful for.’’
Did you know: When Sydney McLaughlin (a member of the 2016 U.S. Olympic Track and Field Team and UC’s Class of 2017) was a student at UC, Sancho served as her bodyguard at various track and field meets.
Biggest changes you’ve seen at UC:  “Just how advanced the building is. All the upgrades in technology are cool. And they have added a lot to the building.’’
What do you love the most about UC? “UC has helped me become an adult, full circle. Rather it’s my life inside or outside this building. I’ve grown a lot over the years and I thank UC for helping me with that.’’
Favorite moment/moments during your time at UC?” My favorite moments are probably graduation and junior/senior prom. And I love when Mrs. Abel makes me cookies every Christmas.That's another reason why I came back.''
Something about yourself that most people don’t know?  “I like to cook.’’
Favorite thing to do in your spare time? Spend time with family
Favorite UC Core Value: “Honesty. Honesty is important in any relationship.’’
Published November 12, 2020 Print