UC's Noah Lytle Has Thrived at His Dream School 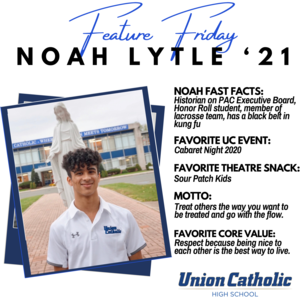 Scotch Plains, N.J. --The senior at UC stars on the stage and in the classroom

So when Lytle hops into his dad’s Toyota Highlander and heads to Union Catholic from his home in Cliffside Park, he never thinks twice about the long commute that he’s taken for the past three years, which is roughly an hour each way.

“It’s so worth it,’’ said Lytle, a senior at UC. “No other schools we looked at could compare to Union Catholic. My mom had heard of UC and said that even though it was far away we should just try it. Then my dad and I went to UC and had a tour of the school with Makay Johnson (UC Class of 2018), and we both fell in love. I knew immediately that it was the right place for me. I instantly felt great when I first entered the school and noticed how friendly everyone at the school is, and how good the school is at everything.’’

Union Cathiolic has been everything the multi-talented Lytle hoped for as he’s thrived both in the classroom, on the playing field, and on the stage since the moment he arrived at the school.

Lytle, whose sister, Chloe, is a freshman at UC, is an Honor Roll Student, a member of the Performing Arts Company, plays on the lacrosse team, and is a member of the Yearbook Committee, the Pilipino club, the music club, and the choir.

He was named the outstanding new member and an ensemble member of PAC as a freshman, outstanding supporting lead for PAC as a junior, he serves as the historian on PAC’s Executive Board, and he’s received academic awards for art, religion, and U.S. history.

Lytle is also a black belt in Kung Fu, and has electrified the crowd at the UC Pep Rally with his martial arts skills.

Lytle said he loves representing the school and feels the balance he’s struck between academics, sports and PAC has helped him.

“The balance has made me very well rounded, and has made me such a hard worker since I always am working towards something, and have learned that hard work truly pays off,’’ said Lytle, who attended the Academy of Saint Joseph of the Palisades in West New York in middle school. And I love representing UC because it makes feel that I am a part of something truly great.’’

What does Lytle love the most about being a student at UC?

“My favorite part of being in PAC is of course performing,’’ said Lytle, who plans to pursue a career in theatre. “I have a knack for performing, and one of the things that makes me excited for the Fall Play was getting the role I wanted (Luke), so that made this show really exciting to me.’’

“It has been very challenging, one the most challenging shows I have done,’’ said Lytle. “One of the hardest parts was having a slight allergic reaction to the cake that I eat in a scene, but the real hardest part was losing the live action effect. It felt very different, and I had use different acting techniques than I usually would.’’

Lytle has also excelled for the lacrosse team. He was a member of the first ever team here at UC in 2018.

“It has been phenomenal to see the sport growing at UC, and how much better my teammates and I have gotten since our freshman year,’’ said Lytle.

What kind of advice would Lytle give younger students who are considering attending UC?

“They should come to UC because it’s such a great school,’’ said Lytle. “You can become involved very easily, and the biggest tip that I have is that you have to enjoy yourself and have fun every second you are there.’’

What is Lytle looking forward to the most this school year?

“I am looking forward to the Play and Musical, and of course lacrosse,’’ said Lytle. “I am also just excited to experience senior year because so much is said about it. It is crazy that it’s actually here.’’