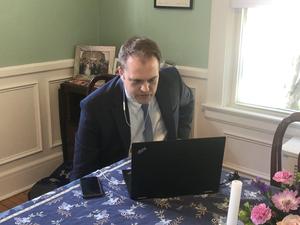 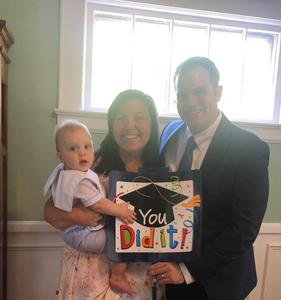 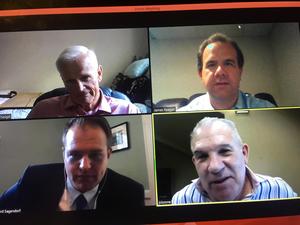 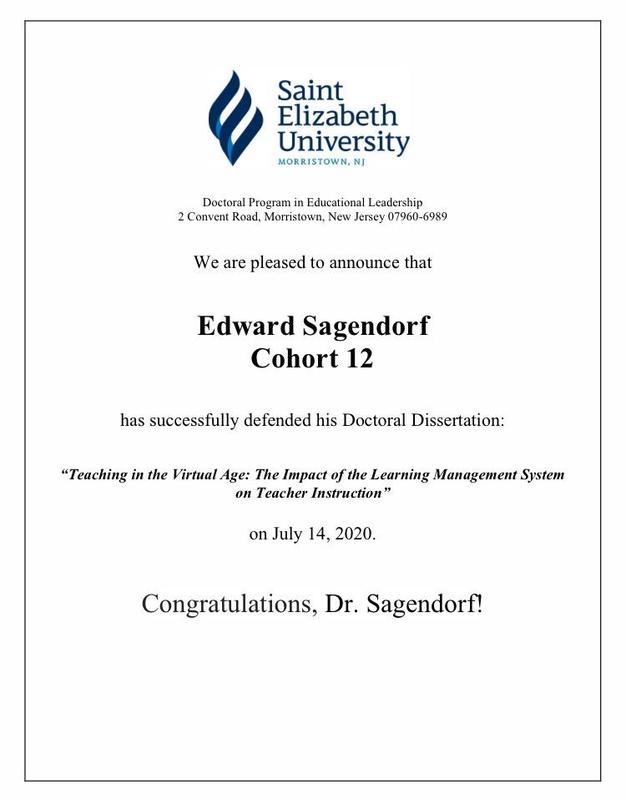 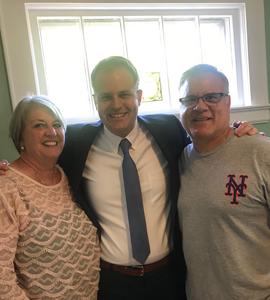 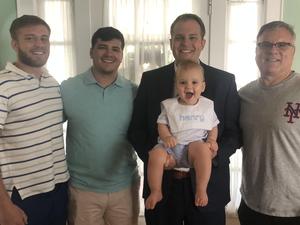 Scotch Plains, N.J. - Dr. Sagendorf graduated from Union Catholic in 2007, and has been a member of the faculty since 2011
Edward Sagendorf flashed a huge ear-to-ear smile and pounded the table with his fist in jubilation as a huge round of applause filled his home in Kenilworth this past Tuesday afternoon.

The faculty member at Union Catholic and alum of the school had just successfully defended his Doctoral dissertation to officially become Dr. Sagendorf, so there was a lot of raw emotion and excitement on display among the group of family members who gathered to witness and celebrate his accomplishment.

“It still feels surreal to me,’’ said Dr. Sagendorf, who earned his Doctorate in Educational Leadership from St. Elizabeth University in Morristown. “It has been a lifelong goal of mine. I have always loved school. My parents always taught me education was something 'no one could ever take away from you'. While the doctorate is the highest degree in academics, receiving it marks only the beginning of my educational journey.’’

The topic of Dr. Sagendorf’s dissertation entitled, “Teaching in the Virtual Age: The Impact of the Learning Management System,’’ was suggested by UC Principal Sister Percylee Hart, RSM.

“Initially, I was not really sure what to focus on researching,'' said Dr. Sagendorf. "It was actually Sister Percylee who recommended the topic. The school made a significant investment in Canvas and it was necessary to gain data on how this impacted instruction at the school. This journey has made me appreciate the writing and editing process. My hope is to share these research skills with my students.’’

The students are what Dr. Sagendorf loves the most about teaching at UC.

“I’ve always wanted to be a teacher,’’ said Dr. Sagendorf. “It is an honor to have the ability to make a positive impact on a student. I have the opportunity to empower students to grow academically, spiritually, and individually.’’

While becoming a teacher was always his goal, Dr. Sagendorf had no idea he’d actually wind up back in his old high school hallways. But many of his classmates from the Class of 2007 had a feeling it would happen. They voted him “most likely to return to UC as a teacher.’’

Dr. Sagendorf’s UC journey started when he walked through the doors of Union Catholic as a freshman in the Fall of 2003.

“I applied to Union Catholic because of the Forensics team and PAC (Performing Arts Company),’’ said Dr. Sagendorf, who grew up in Summit and moved to Elizabeth after his freshman year at UC. “These programs were impressive and far superior than any other school. I loved being a member of this welcoming community. I knew almost every teacher and most students in my class.’’

Dr. Sagendorf has a lot of great memories of his days as a student at UC.

“Some of my fondest memories include Forensics away meets with my team,’’ said Dr. Sagendorf. “My top favorite memory was placing seventh in the nation at Nationals with my duo partner, Mr. John Rotondo.’’

Another one of the great things that came from Dr. Sagendorf’s time at UC was the start of a lifelong friendship with Mr. Rotondo, also a current faculty member at UC and a member of the Class of 2007.
UC Assistant Principal Dr. Jim Reagan Jr., who coached Dr. Sagendorf on the Forensics Team, is very proud of his former pupil.
"I am extremely proud of Edward,'' said Dr. Reagan. "I remember when he first entered Union Catholic as a student. I recall fondly teaching and coaching him and seeing him grow and mature into a fine young man. Now as a colleague I am impressed by his passion and zeal inside the classroom and for all of his students. I am very happy that he has achieved his lifetime goal of earning a doctorate. And I am honored and humbled to have been just a small part of his journey.''
After graduating from UC, Dr. Sagendorf earned a Bachelor of Arts degree in History Education from Montclair State University. While at Montclair State, Dr. Sagendorf began judging for forensics and assistant directing for UC’s spring musicals.

Two weeks after he graduated from Montclair State in 2011, Dr. Sagendorf started at UC as the Transportation Director. A few months later, he began teaching history at UC. By the end of 2012, Dr. Sagendorf was the Head Coach for the Forensics Team, as well as Co-Director for the spring musicals, along with longtime Director and Producer, Mrs. Maryann Carolan (UC Class of ‘86).
Dr. Sagendorf still wears all those hats at UC as he remains the Transportation Director, Head Coach of the Forensics Team, Co-Director for PAC Spring Musicals, in addition to teaching AP U.S. History, World Studies Honors, and World Studies Accelerated. He also serves as an Advanced Placement exam reader, as well as emcees several UC events.

“I do always love to stay busy and involved in different things,’’ said Dr. Sagendorf, who earned his Masters in History from Seton Hall University in 2015. “I get to interact with a lot of different people and groups. I’m not one for routine. I always love to pursue change.’’

Dr. Sagendorf, who has thrived as an educator, was selected in 2018 as a Claes Nobel Educator of Distinction by the National Society of High Scholars (NSHSS).

Dr. Sagendorf is very impressed with all the advances Union Catholic has made over the years.

“The school has more technological offerings for students,’’ said Dr. Sagendorf. “I think the extracurricular program is even more impressive, and students have more opportunities to engage in the outside word. It is remarkable to see the number of students participate in school trips within and outside the country."

Dr. Sagendorf has a message for every young student who wants to know why they should choose Union Catholic.

“You deserve a high school that celebrates your accomplishments, prepares you for the next phase in your life, and makes you a better you,’’ said Dr. Sagendorf. “You are worth the investment.’’

Union Catholic was such a great experience for Dr. Sagendorf that his three brothers, Jonathan ‘11, Thomas ‘13, and  Brian ‘15, followed in his footsteps as Vikings.

Dr. Sagendorf, who calls UC “home,” has another very special reason why he loves UC so much - it’s where he met his wife, Katie (also a faculty member at UC). They met during orientation day at the start of the 2011-12 school year, which was the first year at UC for both of them as teachers.

The Sagendorfs were married in 2015, and the couple became parents for the first time when Henry was born on Oct. 1, 2019.

Of all of his great accomplishments and achievements, Dr. Sagendorf said becoming a dad is by far the greatest of them all.

“It’s the best job out there,’’ said Dr. Sagendorf. “I’m constantly challenged. He brings both of us so much joy. I’m always smiling! He makes me want to be a better teacher and overall person.’’
Published July 16, 2020 Print