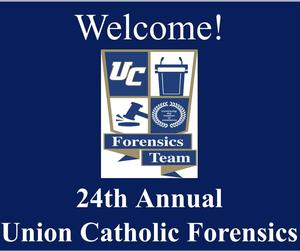 Scotch Plains, N.J. - The tournament was held virtually via Zoom on May 18
The Union Catholic High School Forensics team hosted their 24th Annual Grammar School Forensics Tournament virtually via Zoom on May 18.
"We are incredibly grateful to the students and coaches who participated in this year's tournament,’’ stated Edward Sagendorf, Head Coach of the Union Catholic Forensics team. “We had an incredible response. We are so happy to have had the support to continue to offer this tournament.  The transition from a physical to virtual tournament proved to be seamless. We look forward to the 25th Annual Union Catholic Forensics Tournament next year.’’
Fifteen area grammar schools participated in the competition as students competed in one of four speech categories: Reading, in which students read selections of prose and poetry; Declamation, in which students deliver a noted speech that has been previously delivered; Drama, a memorized delivery of poetry, prose, a monologue, or scene(s) from a play that must be serious in nature, and Humor, a memorized piece of literature (poetry, prose, monologue, scene(s) from a play) including comedy script(s), that is humorous in nature
The results of the tournament are as followed:
First Place in Reading: Sylvie Friedman, Heritage Middle School, Livingston
First Place in Declamation: Dasara Kurti, Heritage Middle School, Livingston
First Place in Drama: Sophia Thomas, St. Francis Academy, Union City
First Place in Humor: Bridget Castano, Trinity Academy, Caldwell
Published May 19, 2020 Print