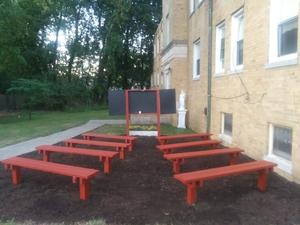 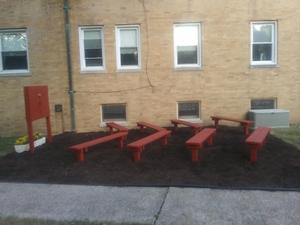 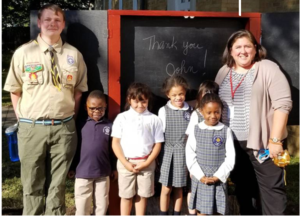 Scotch Plains, N.J. - The senior designed and built an outdoor classroom at St. James the Apostle in Springfield
Union Catholic’s John McElroy fulfilled a longtime dream recently when he achieved the rank of Eagle Scout.
For his project, McElroy, a member of Boy Scout Troop 73 in Springfield, designed and built an outdoor classroom at his alma mater, Saint James the Apostle School in Springfield.
The outdoor classroom consists of eight wooden benches, a blackboard and a large bed of mulch. McElroy said lots of planning went into his project, and it took about six weeks over the summer to build before it was unveiled during a ribbon cutting ceremony on Sept. 19.
The Eagle Scout Service Project is the opportunity for Boy Scouts to demonstrate leadership of others while performing a project for the benefit of his community.
“I started planning before last year, and around March I got the project approved and started working on getting donations and materials,’’ said McElroy, a senior. “The physical work was done in August.
In addition to donations for materials, McElroy organized some fundraising to help offset the cost of materials. He wrote a letter to the school community introducing himself and describing his Eagle Scout project. His appeal resulted in $175 in donations from the school community.
McElroy, who is involved in Peer Ministry, Forensics and is on the Tech Crew for UC’s Performing Arts Company
said it felt very fulfilling to give back to his alma mater and earn the rank of Eagle Scout.
“When I began working on my project, I thought it would be an excellent opportunity to give back to the school community that supported my family and I when I was younger,” said McElroy, a member of the Order of the Arrow, the first level then Brotherhood is the second. Brotherhood
"It feels really good to see that the students are really enjoying it, something I would have enjoyed when I was there,'' said McElroy. The fact that I was responsible for them having this outdoor classroom is such a great feeling, and to make Eagle Scout is a culmination of my seven years of hard work in scouting.’’
Over several weekends in August and September, McElroy and his team of volunteers from his troop and his friends and family, cleared the area and built and painted benches and a blackboard display featuring doors that close and lock. The blackboard display is further protected from the elements with a cover. The area was prepped for the installation of eight benches on either side of the blackboard display. Final touches included mulch provided by Springfield Township and a bed of yellow flowers at the foot of the blackboard.
“The school community is grateful to John for his time and talent and for thinking of Saint James and wanting to give something back,’’ said Mrs. Caroline Ponterio, the Principal at St. James. "The Saint James school community congratulates John on the successful completion of his Eagle Scout Project and we look forward to using the outdoor classroom space he created for many years to come.”
Published February 4, 2020 Print