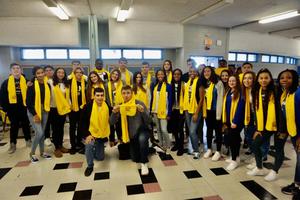 Dozens of Union Catholic students received yellow scarves during their lunch period on Wednesday for participating in the National School Choice Week program.

Each student received a scarf after they wrote down why they chose to attend Union Catholic.

National School Choice Week (NSCW) is held every January with the goal of shining a positive spotlight on the effective education options for children. To meet this goal, NSCW encourages schools, organizations, and individuals to hold celebratory events to raise public awareness of school choice options.

“It’s important to educate students about the choices their families have made in committing to send them to Union Catholic and why those choices were made,’’ said Mrs. Jennifer Dixon, the Director of School Counseling at Union Catholic.  “We discuss how not everyone has those same choices.''

“When I came here for Freshman For A Day I saw how welcoming all the teachers and students were to me,’’ said Touma, who is involved in the Performing Arts Club, SMAC, and the French Club, and plays soccer, basketball and runs track at UC.  “And I really liked the diversity of the school. The atmosphere at this school was something I wanted to be a part of. Union Catholic helps everyone develop into the best person they can be. Coming here has worked out spectacularly for me.’’