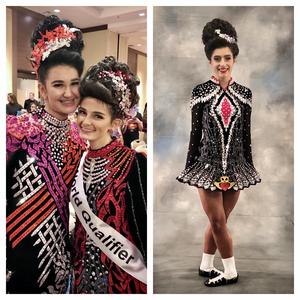 Farrell has been dancing with the O’Riain Academy of Irish Dance in Westwood for ten years. She is a two time World Qualifier and in 2017 she placed among the top 50 dancers in the world in her age group.

Mahaffey has been dancing with the Marie Moore School of Irish Dance in Scotch Plains for twelve years. In 2018, Mahaffey’s dance team placed 2nd at the World Championships and in 2019, Mahaffey placed 22nd at the North American Championships in Vancouver.

Schirm has been dancing for eleven years and has placed in the top half of the region for the last three years. Additionally, Schirm competes in local competitions almost every weekend.

Farrell describes her training as intensive and focused.

“I train approximately four times per week and each session is three or four hours long,” said Farrell. “I participate in 3D movement training with a physical trainer, who reinforces my ability to move in all ways and in all directions.”

Mahaffey says that practicing her craft is vital to her success.

“I practice six hours during the week for my solos, and I have two hour team practices on the weekends leading up to major competitions. We work on stamina, technique, and stage presence.”

Farrell and Mahaffey are looking forward to competing in the World Championships in April and all three dancers will compete in the North American Nationals in Nashville in July.