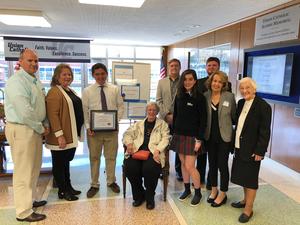 The scholarship was established in memory of Mr. Hammeke by his wife, Grace, and is supported by the Knights of Columbus Summit Council 783, of which Mr. Hammeke was an active member. The award is presented every year to one current UC freshman student and is renewable for the recipient's remaining years at Union Catholic.

Mahaffey, who lives in Scotch Plains, was chosen based on his successful integration into Union Catholic, good grades, and his response to the call to "become all God calls you to be" at UC.

“I feel so honored to have received this award,’’ Mahaffey said. “Mrs. Hammeke is such a wonderful person, and I’m glad I get to participate in Union Catholic’s remembrance of her husband, Mr. Hammeke.”

Mahaffey commented on his Union Catholic experience and discussed why UC is the perfect place for him to achieve his goals.

“The UC community is united,” said Mahaffey. “The teachers are supportive and are always there for you. The students have each other’s backs. Union Catholic has been the greatest experience I have ever had.”

Mahaffey is an active member of the UC student body. He is a member of the Environmental Club, Paws for a Cause, Operation Smile, and Forensics. He is also a member of the Boys Soccer, Basketball, and Lacrosse teams. Additionally, Mahaffey serves as an escort for UC’s Freshman For A Day program.