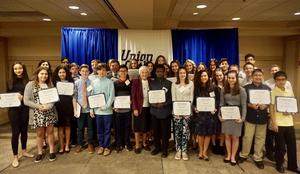 The event began with a warm welcome from Mrs. Betsy Thornton, UC’s Director of Admissions, and then UC Assistant Principal Mrs. Noreen Andrews delivered the opening prayer.
That was followed by a very entertaining speech by UC faculty member and UC Class of 2007 member Mr. Edward Sagendorf, who spoke about his personal journey. UC Principal Sister Percylee Hart, RSM, followed with a heartfelt speech.
After the Class of 2023 Scholarship Recipients were introduced by UC Associate Principal Dr. Karen Piasecki and handed their certificates, UC Student Council President Robert McGuinness concluded the festivities with an inspiring speech.
Bryan Tucker, Christina Doria, and Shaan Trehan were among the future UC students who received scholarships, and they are all thrilled about joining the Union Catholic community.
Tucker, who had a cousin attend Union Catholic, was excited to be honored and can’t wait to get to Union Catholic.
“This whole night is pretty cool, and I’m honored,’’ said Tucker, who plans to run track at UC. “I’m looking forward to going to high school at Union Catholic. I really like the family community and all the great things the school has to offer.’’
Doria, the younger sister of 2017 UC graduate Alexa, said that UC has always felt like home to her.